Fresh from the paint shop: Introducing Delta’s first A220

Delta’s first Airbus A220-100 saw the light of day this week after rolling out of the paint shop at the A220 assembly line in Mirabel, Quebec.

Larry Cato, a program manager on Delta’s Fleet Management team, was onsite for the occasion. “There’s nothing like seeing years of planning come together in the shape of a freshly painted aircraft,” Cato said. “It’s a major milestone for the future of our fleet.”

The painting process took nine days, 200 rolls of masking tape and 165 gallons of paint to complete.

For Julie Léveillé, an Airbus supervisor in the Mirabel paint shop, seeing this aircraft in its signature Delta colors is particularly meaningful. “It’s a tremendous feeling of accomplishment to know we just outfitted North America’s first A220 from tail to tip,” Léveillé said. “I’ve been working in the paint shop for 15 years. It can be a challenging job, but seeing the finished product makes it worth it.”

Now that the aircraft is decked out in Delta’s livery, it will move on to final assembly in Mirabel before taking off for its first test flight later this fall.

Delta will be first U.S. airline to take delivery of the A220, formerly known as the “C Series,” which will feature a state-of-the art interior and best-in-class fuel performance.

Stay tuned to Delta News Hub for updates on the A220’s progress. 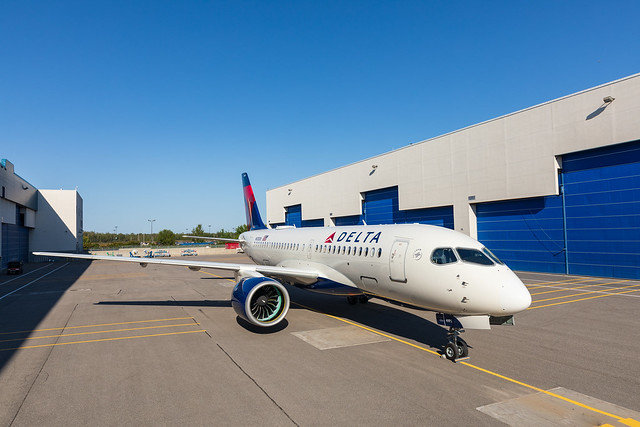