All flights between New York-JFK and Los Angeles, San Francisco and Seattle will feature flat-bed seats on Boeing 757 and 767 aircraft by summer 2015. The continued focus on improving travel between New York and key West Coast markets is another way that Delta is making smart investments to improve travel for customers.

"Customers traveling between New York and Los Angeles continue to tell us they expect the best from Delta including the comfort of full flat-bed seats in BusinessElite and an upgraded Economy Comfort experience," said Jeff Robertson, vice president – Product Development, Sky Clubs and Marketing Communications. "Delta is focused on providing the industry's best travel experience on the most important non-stop route in the United States."

Transcontinental 767 aircraft
The 767 transcontinental product features updated interiors including 26 full flat-bed BusinessElite seats with direct aisle access at every seat in a 1-2-1 configuration.  The 21-inch-wide seats offer an average bed length of 79 inches and feature a 10.6-inch video monitor.  The 767s are configured with 29 Economy Comfort seats featuring 35 inches of pitch and up to 50 percent more recline. Each of the 171 seats in the economy cabin features a 9-inch video monitor and USB power.  Standard 110v power is available in the BusinessElite cabin and Economy Comfort section.

Transcontinental 757 aircraft
The 757 transcontinental aircraft includes 16 full flat-bed seats arranged in a 2-2 configuration in the BusinessElite cabin. Each seat is 20 inches wide and is expandable up to 22 inches with an average bed length of 76 inches. Cabin mood lighting and a high-definition, 16-inch video monitor at each seat further enhance the onboard experience. The updated 757 transcontinental aircraft includes changes to the economy cabin with 44 extra-legroom Economy Comfort seats which offer 35 inches of pitch and up to 50 percent more recline in a 3-by-3 configuration in addition to 108 standard economy seats.

From New York-JFK to Los Angeles, all seats in the economy cabin feature next generation seat design for more personal space, an adjustable headrest, a nine-inch seatback video monitor and standard 110v and USB power ports available from each seat. Delta has been enhancing the transcon experience from nose to tail since 2013 with the addition of products such as complimentary Starbucks coffee and headsets for all customers. The New York to Los Angeles transcontinental fleet features in-flight Wi-Fi and an entertainment library of more than 1,000 on-demand options including movies, TV shows, music and games.

The July 2014 schedule between New York–JFK and Los Angeles is below.

Today's announcement builds on Delta's industry leadership in exceeding customer expectations by being the first major U.S. airline to introduce:

Delta has invested billions of dollars in the customer experience, including updating interiors with more baggage space and access to power throughout 225 domestic narrowbody aircraft through 2016, and building a new Terminal 4 at New York-JFK and the Maynard H. Jackson Jr. International Terminal in Atlanta. Delta has also spent more than $100 million to expand, renovate and consolidate terminals C and D at New York-LaGuardia Airport and opened a Sky Deck at Delta Sky Clubs in New York-JFK and Atlanta in 2013. Additionally, customers have seen Delta's investment in its more than 45 Delta Sky Clubs throughout the system, power recharging stations at dozens of airports, and continued updates to the Fly Delta app including features such as integrated baggage tracking and mobile check-in. Customers can see a complete overview of Delta's ongoing updates to its products with the Delta Fleet Sheet on Facebook. 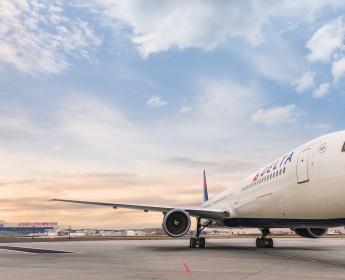 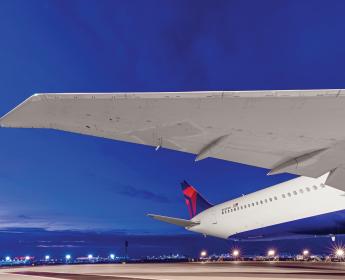