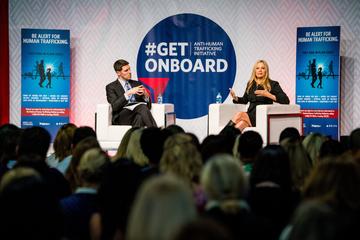 Over 500 Delta people gathered together Monday to rally against human trafficking and celebrate the #GetOnBoard campaign's one year anniversary.

Academy Award winner Mira Sorvino joined employees at the Delta Flight Museum. As the United Nations Ambassador to Combat Human Trafficking, Sorvino spoke to her personal passion for the fight. She shared eye-opening stories from her in-depth trafficking research and work with human trafficking survivors.

“I can’t stress enough the opportunity you have to intercept human trafficking, working for an airline,” Sovino said. “Almost every story I just told you included someone, somewhere getting on a plane.”

The event included presentations from anti-trafficking partners, Polaris and Street Grace, and focused on the major headway Delta has made since the campaign launched last March. A million dollar sponsorship of the National Human Trafficking Hotline in October was recognized, and between Delta and its customers’ donations, 56 flights have been provided to relieve trafficking victims in critical situations.

Keeping the momentum going, the #GetOnBoard Steering Committee revealed new training, exclusive to Delta employees, to teach them to be detectors of human trafficking in the air, on layovers or in their local communities. It was designed by experts at Polaris through data-driven scenarios of trafficking cases and with input from former survivors. The training follows a trafficker and his victims along different stops in the travel journey, raising the employee’s awareness for where and how to spot signs of exploitation. 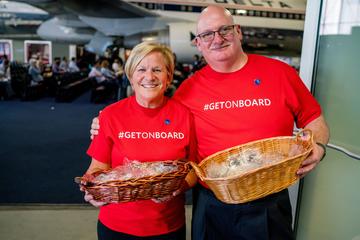 “Vigilant safety for each of our 180 million customers reaches far beyond maintaining aircraft or a reliable operation,” said Allison Ausband, senior vice president – In-Flight Service. “If we all take the training, Delta people will be a strong force exposing traffickers and fighting for victims on each corner of the Earth.” 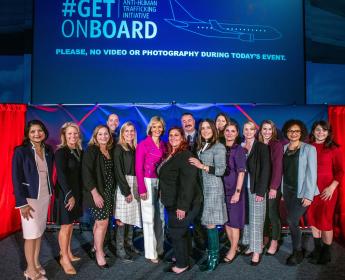