The Disney Cross Country Classic was just a day away and New Jersey’s Ocean City High School team was feeling confident as they walked into Philadelphia International Airport.

They had put in the countless hours and miles needed to compete in their division’s highest level, but suddenly they faced an unexpected challenge: their flight to Orlando, booked on another airline, had been canceled. The airline had no other flight available to get them to Disney in time for the race. 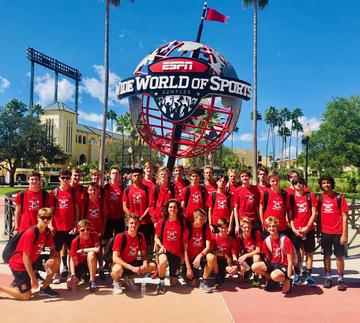 Caught in a bind, at about 10:30 p.m. the team took to Twitter to seek help from Delta, saying, “Our race is tomorrow but our flight was cancelled!! We like to run but not that far! Can you help #getocxctodisney??”

Despite seeing the team was not booked on Delta, the airline’s Digital Engagement team in the Operations and Customer Center in Atlanta quickly worked with colleagues to secure an aircraft and crew to fly from Atlanta to Philadelphia. The team was bound for Orlando within hours, on their own chartered jet. As the rescue flight made its way from Atlanta with pilots and flight attendants who stepped at a moment’s notice, Delta’s team in Philadelphia coordinated to get the runners’ tickets transferred to Delta to ensure they were set to go once the plane arrived.

“This story underscores the power of social media and the extent to which Delta people are increasingly engaging with customers on these platforms to solve problems ranging from changing a seat to finding a spare airplane for a team in need,” said Laura McGill, Manager – Social Media Customer Solutions. “I can’t be prouder of the quick work of our Digital Engagement team in helping to get these kids to Disney in the nick of time.”

“Thank you @Delta for getting us a private charter!! We will forever be grateful for your kindness and generosity. Definitely a “first class” act!!” the team tweeted as they departed.

Despite a long night - and an early-morning landing in Orlando on race day - the Ocean City Red Raiders ran unfazed. The boys took first place and the girls teams earned second and fourth.

As they celebrated at Disney, the team tweeted one last thank you to Delta people for carrying them to the starting line. “Congrats to our teams in @Disney as the boys won the Varsity AND JV meets, while our girls placed 2nd!! THANK YOU @Delta for helping us make the trip. It’s been a crazy 24 hrs but well worth it. We did it for @Delta!”