From uniforms to planes and much more in between, Delta turns all things pink in October – including Sky magazine – to raise money for the Breast Cancer Research Foundation. 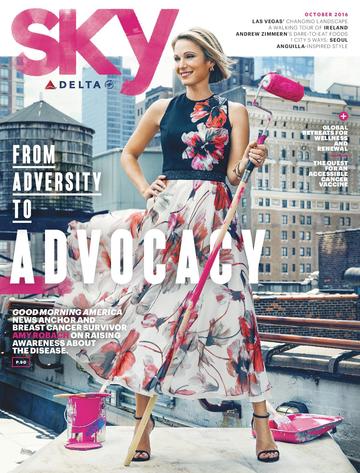 In this month’s issue, Good Morning America anchor and breast cancer survivor Amy Robach shares how she unexpectedly became the starring character of her own news story three years ago. Fellow anchor and breast cancer survivor Robin Roberts encouraged Robach to do an on-air mammogram because it “would save a life.” Robach just didn’t realize at the time it would actually save hers.

“Thank God I got that mammogram,” she says. “Time was not on my side.”

Robach was diagnosed with stage two breast cancer, despite having no family history of the disease. Today, she is cancer-free, but her lifelong battle continues.

“The mental battle is more difficult than the physical one, because you’re always waiting for the cancer to come back… I tell myself I’m still fighting,” she says.

Since 2005, Delta’s employees, customers and their friends and families have raised $11 million for BCRF, including $1.75 million just last year. Soon, Delta’s famous “pink plane” will kick off the airline’s month-long campaign with a special flight from New York to Los Angeles carrying 140 breast cancer survivors and caregivers, many of whom are Delta employees.