‘Harvey is strong, but so is Houston’ 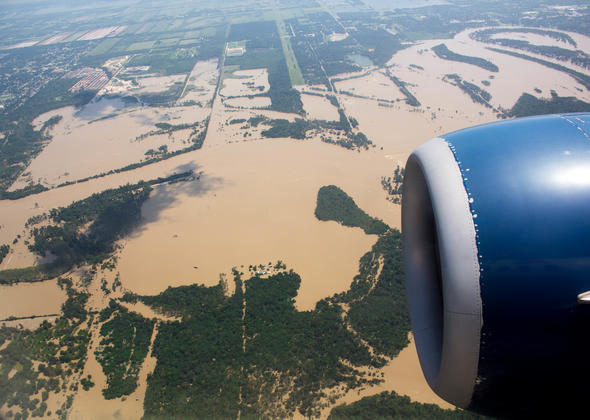 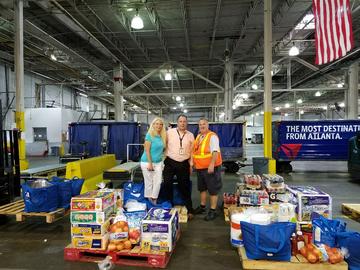 Early in the week, Delta asked Houston teams to come up a list of everything they needed. Within hours, cots, clothing, paper goods, fresh and non-perishable foods, personal hygiene items, water, Powerade and hot meals were packed on to an aircraft. Representatives from Airport Customer Service, the Delta Care Fund, Corporate Security, IT and others flew with the supplies from Atlanta Thursday morning.

“We wanted to show our people that the whole country is behind you — especially everyone at Delta,” said Michele CarsonVaughn, Delta’s Director – Airport Operations.

A number of TDY agents also packed their bags for temporary assignment after Michelle Moreno, Field Director – Airport Customer Service, Midwest Region, put out a system-wide call for willing workers to leave their cities and serve as extra hands in Houston.

Pedro Valadez, Station Manager – St. Louis International Airport and Houston native, still has family in the area. He was one of the first to sign up: “I felt helpless, so it was great that Delta would let me come do something.”

‘We’ll do whatever it takes’ 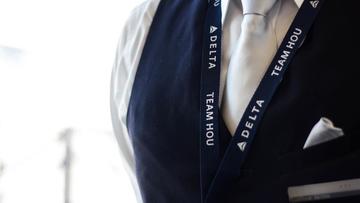 From the air, the city looked as if it were a massive lake with no defined parameters. What appeared as docks were actually rooftops; small squares sitting above the top of the water, places where people stood just days before to take refuge. Only treetops were visible in some places, hardly peeking out above the body of brown water. Tiny rescue boats could be seen circling below.

Although Houston-Hobby (HOU) was dry when the relief flight arrived, the vacancy of the airport looked like a crisis zone. The aircraft, full of supplies, taxied past terminal after terminal of empty gates on a deserted tarmac after three days of closed operations. As the plane rounded a corner to park, the only below-wing employees at HOU that morning sat together on tugs surrounding the gate, waiting.

Despite the devastation Houston crews faced, their morale was unwavering. When the aircraft door opened, the relief flight was met with a smiling and cheering crew. 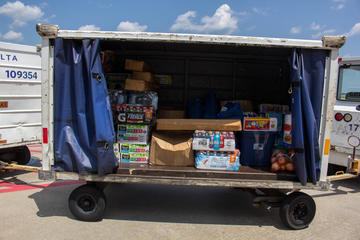 “We are so happy to have our first 737 here with all the supplies. We have been waiting at the hotel for a week and are ready to work,” said Abdoulie Dampha, a redcoat at HOU. “We’ll do whatever it takes to put this difficult time behind us and to be giving a 100 percent again, like we do every day.”

The baggage belt that typically only sees luggage and cargo carried baby supplies and food down from the aircraft. Inside, employees from the relief flight hugged local Delta people and encouraged them to keep their spirits high. After living under the same roof at the airport hotel, the HOU crew had started calling each other “roomies.” Station Manager Randy Bialcik made plans to transport supplies to other employees’ homes and shelters.

‘More of a family than ever’

The flight then traveled 31 miles to greet Houston-International with warm danishes and fried chicken, and found yet another crew who went into the hurricane as coworkers and came out as  family. 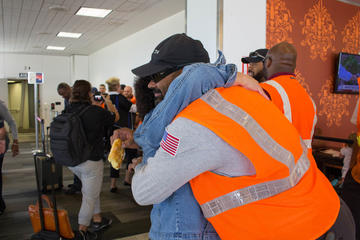 “We’ve had everyone bring their families that couldn’t get home to the hotel. We’ve had a lot of little ones running around; we even had birthday parties,” said Davina Treadwell, Station Manager – IAH. “We’ve done everything together. We’ve became more of a family than ever,”

As volunteers handed out hot meals and supplies, Moreno assured the crew: whatever they needed, just send her a list.

“I was shedding tears at this kind of love, for you guys to be here through our need,” said John Kandeh, a Houston-based below-wing customer service agent.

Upon resuming operations, contacting families and friends remains a top priority as the Delta family perseveres together amidst the crisis.

“Harvey is strong, but so is Houston,” Dampha said. “We are going to fight, and come back from this one. It is what we have to push for.”

Delta continues to pack supplies and hot meals daily on to flights for crew members at IAH and HOU. Customers can support relief efforts for Harvey victims by donating miles to the Red Cross through SkyWish, the charitable arm of Delta's loyalty program SkyMiles. Delta will match donations up to 10 million miles. Customers can also donate through Delta's Customer Microsite, created in partnership with the Red Cross. Donations will go toward immediate relief needs​