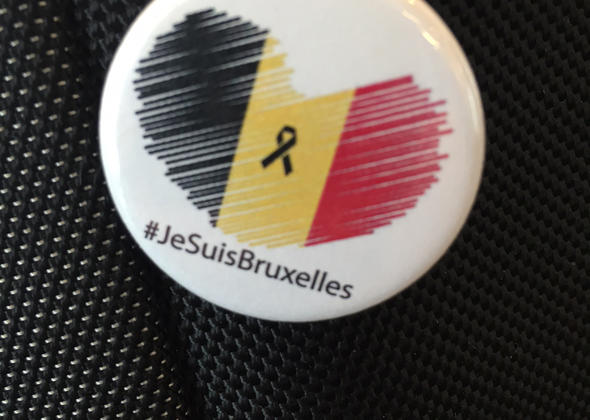 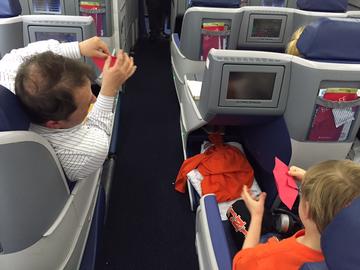 More than 7,000 paper hearts were created by Atlanta and New York employees in the “Hearts for Brussels” campaign to show solidarity with their local Delta colleagues and the people of Belgium. 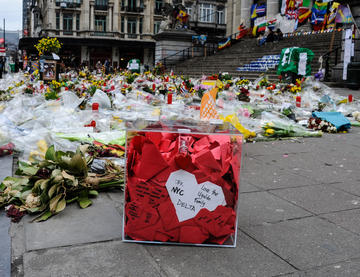 Board Council members Robert McQueston and Joseph Mangino, accompanied by Denise Gibbs, a “brand ambassador,” placed a clear acrylic box full of hearts, on which employees had written personal messages, in front of the Brussels Stock Exchange. This location has become a makeshift shrine since terrorists detonated two bombs at the airport and another at a Metro station.

After placing the box among the floral tributes, McQueston said: “It has been inspirational to see the response of Delta employees. So many people have supported this effort. The entire effort took place in about 10 days from start to finish.”

Delta’s Belgium sales manager, Frederic Schenk added, “It's the first time I've been to the memorial. I'm touched to see how many people have gathered here to commemorate those impacted by the attacks. It's comforting that everyone is coming together and caring for each other. It's the only thing we can do after such horrific events - to be human.”

Mangino told Schenk during the presentation of hearts to the Belgium team, “The support for you back home from all divisions is incredible. Everyone would have jumped on a plane to help but that's not possible, so they have written these hearts to show you that we have your back.”

“The support we have received on these paper hearts has been overwhelming – it really is a great example of the Delta family,” replied Schenk. “We have had a very difficult few weeks, but knowing our friends and colleagues are behind us means a lot. We remain positive and look forward to returning to our office and serving our customers.” 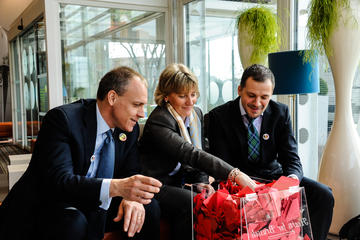 The initiative grew after it was proposed that Delta mark the tragedy when service resumed. The initiative was taken to the Delta Board Council, whose members brainstormed ideas and came up with the symbolic “Hearts for Brussels.”

One heart bore a message inside, “Brussels you are in our hearts. Keep climbing” and another read, “We are ONE with you and will get through this victorious.”

"I'm very touched by the Hearts for Brussels campaign,” said Pascale Ducate, Delta Customer Service Supervisor. “The feeling of support from our colleagues in the U.S. has been a real source of strength for the team and shows the spirit of the Delta family."

As Flight 42 departed JFK, there were also gestures to mark the restart: ramp employees displaying the U.S. and Belgian flags, and customers were given pins that said “Je Suis Bruxelles” (I am Brussels).

After the tributes, there was much work to do. 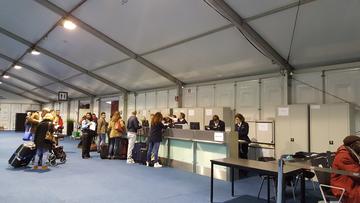 In line with guidance from officials at the badly damaged Brussels Airport, Delta opened check-in four hours ahead of the 11:05 a.m. flight from Brussels back to JFK.

Employees placed three portable agent workstations in the car park to ensure customers would have the correct travel documents ahead of police screening. Only passengers holding printed itineraries or boarding passes would be allowed past the police X-ray machines and into the terminal, so the portable workstations ensured every Delta passenger could get inside.

From the makeshift police tent, customers proceeded to the four check-in counters, dropped their bags and made their way to passport control. All airside areas, including security and the departure gates, were undamaged in the blasts.

Some 129 customers were booked on Friday’s flight to JFK, which departed ahead of schedule. Once onboard, customers were presented with a small box of Belgian chocolates and a badge of the Belgian flag.

“If there's one thing I can say, it's that the team has been phenomenal. Kudos to everyone who has supported our #teamBRU,” said Christine Marchand-Pardo, Delta’s Director Airport Customer Service - Europe, Middle East and Africa.

Nat Pieper, Senior Vice President - Europe, Middle East and Africa, was present for the momentous morning. “It's been an amazing effort all round,” he said. “It's a privilege to be here.”

RELATED: With hundreds of customers waiting to fly between the United States and Belgium, Delta has placed a larger aircraft, an Airbus A330, on the route for the next week. Delta’s change fee waiver remains in place for passengers booked to fly between the countries until April 30.