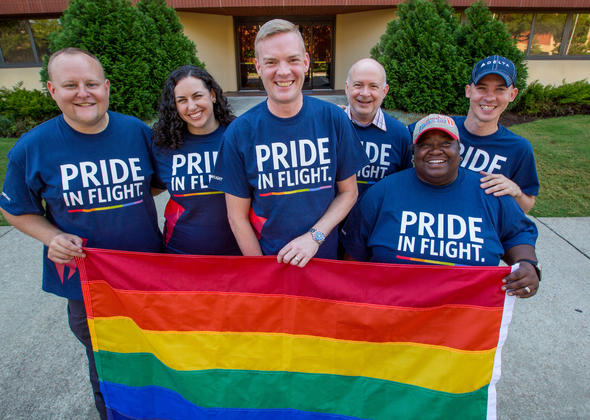 A few months after the tragic shooting at Pulse nightclub in Orlando, Fla., Mathew Palmer received a phone call:

Calls like this aren’t unusual for Palmer, a New York-based flight attendant who supports the airline’s LGBTQ community as U.S. City Rep for Delta’s Employee Equality Network. The organization is a voluntary employee group committed to promoting inclusion, respect for differences, equal opportunity and workplace diversity, and serves as a champion for LGBTQ employees and their allies.

But this was different, Palmer said. Though a Delta employee, the caller was a stranger, trusting Palmer with a truly intimate matter. The two discussed everything, from what the father should say to what he shouldn’t.

“His questions were all over the place; he was worried,” Palmer said. “But what started out as a reluctant acceptance turned into genuine understanding. The more we talked, the more comfortable he became.”

And that, Palmer said, is just what DEEN is about.

Many at Delta know DEEN for its staunch support of Pride events around the world. In 2017, DEEN, in partnership with Delta’s Community Engagement team, will participate in 16 Pride initiatives, from the Nashville Pride Walk to Pride in London. These festivals offer the LGBTQ community and allies important opportunities to celebrate and support one another – but that’s only one part of the group’s purpose.

“We want employees and the business to see us for what we are – a business resource group. Whether it’s a parent with a child who has just come out, or an employee who needs assistance, we want people to know that we’re here to help,” Palmer said.

David Janke, DEEN’s Vice President and Technical Facilitator – In-Flight Service, said Delta has taken up the group on its offer to advise the company on policies of interest to LGBTQ employees, such as health benefits for same-sex couples.

“Since implementing those changes, Delta achieved a perfect score on the Human Rights Campaign Foundations’ Corporate Equality Index,” Janke said. The score is based on a national survey that analyzes corporate practices related to workplace equality.

“We’re listening to their thoughts and concerns and making business decisions with that feedback in mind,” he said. “Our employee groups, like DEEN, provide great perspective and help drive significant impact for Delta people, our customers and the communities we service.”

Additionally, the group is active in organizations that make a difference in the lives of others. DEEN has raised money for and volunteered with Jerusalem House, an Atlanta-based nonprofit providing housing to low-income and homeless people affected by HIV/AIDS; The Trevor Project, a toll-free hotline for LGBTQ youth; and PFLAG, an advocacy group for LGBTQ people and their family, friends and allies.

Janke, who is passionate about giving back, was the top fundraiser for AID Atlanta and its pediatric research fund through the 2012 Atlanta Cotillion event, raising $80,000.

Moving forward, Janke said the group hopes to be seen as an advocate for the equality of all employees, not just those who fall under the LGBTQ umbrella.

“We strive to make everyone feel welcome,” he said. “DEEN is really about Delta as a whole supporting each other. We all work for the same company, and we’re all deserving of support.”

In the coming year, Janke and Palmer said the group plans to reach out and welcome a diverse group of employees who have one interest in common: supporting the equal treatment of one another. They expect to host mixers soon, and all Delta people are welcome to attend.