Delta employees across the divisions celebrated Friday’s historic profit sharing payout with festivities ranging from a Star Trek-themed party to an Oscars-inspired event.

The $1.5 billion payout - the largest in the history of corporate profit sharing programs – also attracted attention outside Delta, as media outlets across the U.S. reported the news. 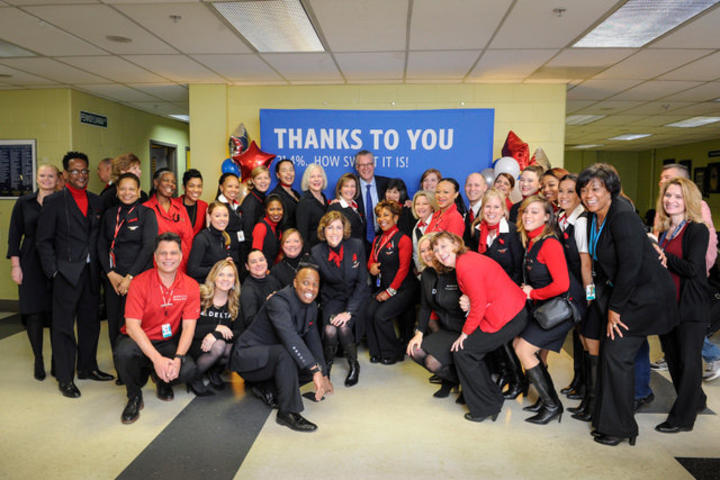 In Reservation Sales and Customer Care, teams celebrated with a Star Trek theme. Charisse Evans, Vice President – Reservations Sales and Customer Care, said Delta and Star Trek have a number of similarities, including valuing visionary leaders, championing diversity and inclusion, and inspiring the future. “Let’s let the world – no, the galaxy – hear our cheers, enthusiasm and celebratory spirit,” Evans said in a memo to the teams.

Stephanie Richard, Customer Experience Supervisor – Salt Lake City, said, “You could actually feel the excitement in the air as we celebrated going where no one else has gone before. A lot of our leaders dressed up in Star Trek costumes. It was a blast to have them here to celebrate with us!”

Meanwhile in Anchorage, Alaska, leaders treated the team to a night of being a “Delta Star.” “Catered with some rockin’ Mexican food, goodie bags and a walk along the red carpet, it was just like the Oscars,” said Theresa Buzby, Airport Customer Service – Ted Stevens Anchorage International.

Employees also took to Twitter to voice their thanks:

#deltaproud Not just 'PROUD' of my company, but HONORED 2 b part of such awesome company that brings ppl the world https://t.co/lH6d8VgMye

I officially have ZERO credit card debt!!! Thank you Delta!!!#DeltaProud

$1.5 Billion in profit sharing today. Largest payout by any company, ever. @Delta taking care of their people. #deltaproud

The huge payout was made possible by Delta’s record profits in 2015. News organizations took note, reporting stories on Friday and over the weekend.

The Seattle Times, Minneapolis Star-Tribune and The Fort Worth Star-Telegram (paywall) were among many newspapers that spotlighted the payout, and the impact on their communities. Numerous TV news stations, blogs and news websites also reported on Delta’s profit sharing.

The Atlanta Business Chronicle noted that the airline has paid out $4.1 billion to employees in profit sharing and Shared Rewards over the past five years.