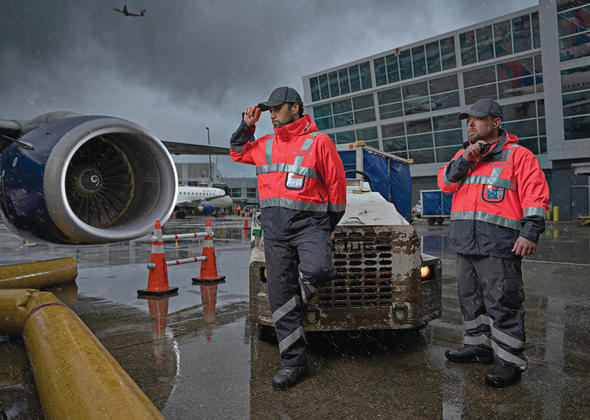 After a strong start to the year, Delta people are well into what could be another record-breaking season as they connect millions of customers across the globe this summer, with a pumped-up flight schedule of up to 6,100 daily flights through Labor Day.

Delta kicked off the busy summer season with a chart-topping May performance, flying more than 18.1 million customers – the highest ever for the month of May, including a record 2.1 million over Memorial Day weekend.

Whether Delta people are in the air, assisting customers in airports or in Engagement Centers, on the ramp, in line maintenance or in a TechOps hangar, teams across the system work with the airline's Operations and Customer Center in Atlanta to keep customers arriving on time amid the challenges brought on by the busy season – all while keeping safety top of mind.

​Eyes on the skies with Delta Meteorology

The transition into the warmer months can be especially tricky when navigating around inclement weather, with daily forecasts often setting the stage for planning around possible disruptions.

Enter Delta's team of in-house meteorologists, who monitor weather systems and turbulent air around the world 24/7.

Embedded in the OCC, the team analyzes the latest weather data and provides regular updates to System Operations Managers and dispatchers, so they can make informed decisions when planning ahead for customers.

Before each departure, Delta's Flight Superintendents plan the best route based on the weather forecast and ATC initiatives. They monitor every flight and work with the pilot to make adjustments to the flight plan as needed.

Delta Meteorology helps keep teams across the airline updated on weather conditions that could potentially disrupt airport operations or the airspace between cities.  With safety of Delta's customers and employees at the forefront, the team keeps an eye on potential local wind conditions affecting airport operations, varying precipitation types through the year, and at cruise altitude, enroute weather hazards and turbulence that may impact operations.

The most up-to-date forecasts are shared each morning when teams representing more than 20 groups across the company come together to form a daily game plan. Similar OCC briefings are shared with all employees where each morning, Delta's Duty Directors provide a weather and operational outlook, and provide an idea of what the operations teams are planning for the day.

Operations teams use their forecasts to minimize disruptions by changing flight paths, possibly substituting crews or aircraft to ease delays, or even issuing travel waivers for customers to make changes to their itinerary ahead of time.

The biggest weather challenge is the unpredictability of thunderstorms. Widespread development of storm systems can slow, even halt air traffic through airports or regions along flight paths – causing a cascade of potential delays and problems.

Last summer the airline overcame 26 days of weather-related disruptions between June and September, but through it all, Delta people maintained strong operational reliability while putting safety above all.

Unlike other seasons, summer weather can vary by the hour, making it harder to precisely forecast the timing and severity, as well as the potential disruption to the operation. "It's more difficult this time of year because you're dealing with smaller-scale storms that are often random in development," said Mark Yerges, Lead Meteorologist in the OCC.

That's why Yerges and the rest of Delta's Meteorology team focuses on the probability of storms that could negatively affect flights. "We keep an eye on the skies to help keep flights operating safety and by giving teams a heads up of what to expect, allowing them to plan for what works best for their teams and our customers."

Adding to the challenge, unlike winter storms that planes can typically fly over, thunderstorms often extend from 30,000 to 45,000 feet, well above typical cruise altitude. This means planes have to go around them, increasing the time in the air. As a result, flights in the summer regularly require additional fuel to account for the extra flight time, and contingency fuel in case a thunderstorm requires flights to hold in the air or divert to an alternate airport.

Yerges explained that even when not directly over an airport, storms in surrounding regions can have a significant impact, especially in the Northeastern part of the U.S. where airspace is saturated. This means that even if New York City is dry and thunderstorm-free, inclement weather in surrounding airspace may impede flight routes — the highways in the sky — and prevent flights from approaching Delta's LaGuardia, JFK and Boston hubs for periods of time.

When flights through a Delta hub are held up by weather, the effects can sometimes ripple through the system and affect operations in other cities. Flights impacted by FAA-mandated air traffic control initiatives like ground delay programs and ground stops — intended to meter traffic in and out of busy airports amid inclement weather— subsequently affect downline flights, crew duty limits and aircraft route schedules.

The same rings true for areas between two airports, like Atlanta and Los Angeles for example. If the airspace between large hubs becomes blocked, it can pose problems if routes are closed and congestion builds as a result. Navigating around storms and areas of turbulent air can add delay time into the operation.

This is where teams come together in the OCC to make changes to reset the schedule as quickly, efficiently and safely as possible for customers and employees around the globe.

"We analyze the forecast and actual weather and communicate the expected impact to the operation so that all other groups across the airline can make necessary adjustments to get customers to where they need to go. They do this while also helping employees be as prepared to handle any possible changes resulting from a weather disruption," said Mike Schwartz, Director of Operations Management.