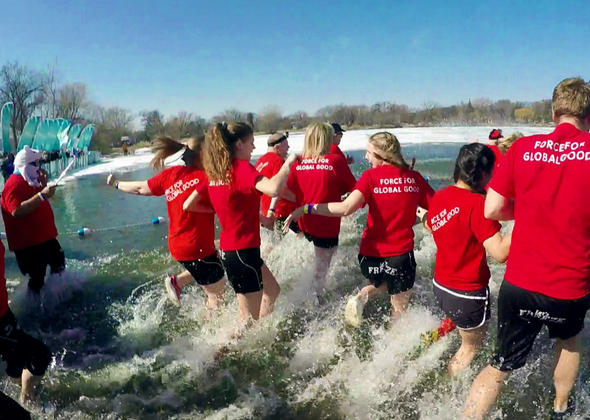 Minneapolis-based employee Nicole Tentinger shares her story about being a part of the annual Polar Plunge with Delta colleagues from across the globe to benefit Special Olympics Minnesota, as told to Rachel Solomon, Corporate Communications. 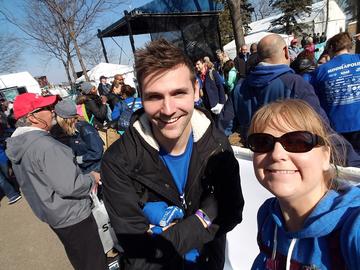 Some people say we’re crazy. I can’t blame them – jumping into Minneapolis’ frozen Lake Calhoun during what can be the coldest time of the year doesn’t sound like something a group of sane people would typically do.

But really, we’re just passionate about making the community in which we live and serve a better place.

That’s why I joined a group of more than 250 other Delta people from around the world to take part in this year’s Minneapolis Polar Plunge on Saturday to benefit Special Olympics Minnesota. We raised more than $110,000.

‘Everyone knows someone touched by an intellectual disability’ 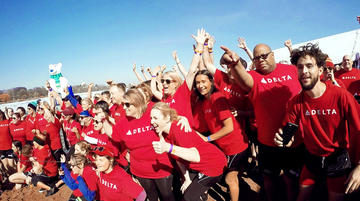 Minnesota Law Enforcement has held the Polar Plunge for the last 20 years on behalf of its more than 8,100 local Special Olympics athletes. Almost everyone knows someone touched by an intellectual disability, so it’s easy to understand why the work of Special Olympics Minnesota is so important to our community. Over the last 10 years, Delta employees from around the world have come together to bolster their efforts.

To kick off the festivities on Friday, we had the opportunity to hear from an athlete first-hand.

Nell is an athlete in everything from swimming to track and field to weightlifting. Through Special Olympics Minnesota, she has been able to get a job, is an ambassador of the organization and was also one of the developers of a health and wellness initiative that started out here locally and is now a national program. Her health has dramatically improved in the year and a half since that program started.

Everyone really appreciated hearing from her – it was a powerful moment and really highlighted why we were all there.

The first time I participated in the Polar Plunge was four years ago, and it was one of our coldest jumping years yet.

With temperatures hovering at -2 degrees Fahrenheit (-19 with windchill!), many people were nervous about the plunge. You might expect those people to plunge once and be done with it, but amazingly, it was those same people who would come back the next year and the years following. There’s something about getting together with your friends, family and colleagues and doing something crazy and good – it’s addicting. 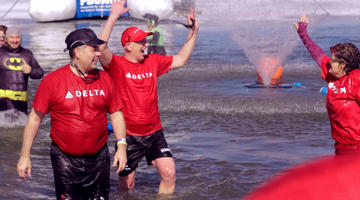 While ‘plunging’ might seem intimidating, many people just hop into the water and right back out. This year was a little different – since there was no ice to stand on and jump in, we ran into the water, circled around a buoy and ran back out – but usually, it goes by quickly. That is, unless you’re Polar Plunge team leader, Jeff Hart.

Each year, Jeff, General Manager – Airport Customer Service, MSP, stays in the freezing water the entire time, encouraging every Delta team member to jump. I did that in Jeff’s place last year and I remember getting out of the water and being certain that I’d never feel my toes again. It was painfully cold but worth it nevertheless.

‘Bringing Delta people together from all corners of the world’ 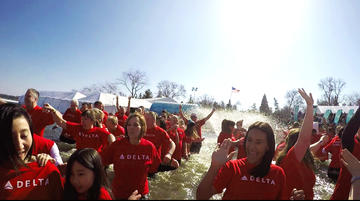 On Saturday, more than 250 domestic and international Delta employees flew from all over the world to help us meet – and surpass – our $100,000 goal. It was a breezy, 40 degree day – quite the contrast from the below-zero Polar Plunge I’d experienced just a few years ago.

Delta plungers lined up along the beach, ready to dive in, dressed in their red ‘Delta Force for Global Good’ shirts. The event officials kicked off the event, and our plungers raced into the freezing waters at full force – it was a sea of red!

Nearly every region of the map was well-represented, with plungers from Singapore, Japan, Russia, South America, Latin America, Caribbean and all over the U.S. That’s probably not a surprise – bringing people together from all corners of the world is what Delta does best. 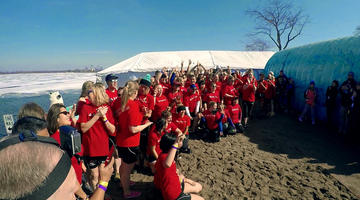 One international group that was particularly noteworthy were the ‘Pacific Plungers’ from the Asia-Pacific region with 15 plungers donating nearly $12,000.  Of all the Delta teams, the Minneapolis’ ‘Frozen Flyers’ raised the most money – more than $66,800.

Delta people also pulled out all the stops with their grassroots fundraising efforts. Starting in January 2017, we began our campaign to raise money holding “pizza fundraisers” and prize giveaways.  One of our Minneapolis-based colleagues, Brandon Toomey, even cooked 81 pounds of pulled pork to sell and raised $1,200.

Once everyone finished their plunge, we came together again to celebrate our annual tradition over a big barbecue lunch. It’s here where we all agree – whether you’re from Tokyo or Minneapolis, the reason we plunge every year is the same: giving back to our community is just a part of our culture.