‘I will be on cloud 9 for weeks:’ 54 passengers surprise Delta Captain with congratulatory notes 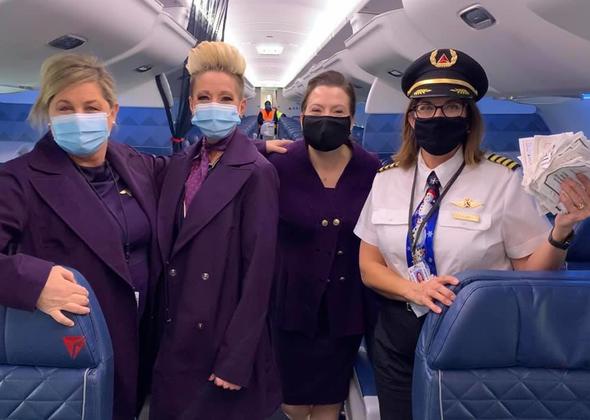 When Delta Captain Angelia Smith emerged from the flight deck shortly after landing in Atlanta, she was surprised to find passengers still on board, unconcerned about making their connections or heading home.

After 23 years at Delta, Angelia had recently been promoted from First Officer to Captain of an Airbus 320 – an accomplishment that Atlanta-based flight attendant Michelle Lovett knew was worth celebrating. The Captain is the commander of the aircraft and is the most experienced pilot in the flight deck, whereas a First Officer, also known as a ‘co-pilot,’ is second in command. To celebrate, Michelle asked passengers to write Angelia congratulatory notes on their aircraft napkins before landing.

“I wanted to make her feel that we were excited for her,” said Michelle. “I know the captains can’t hear us make the announcements, so I asked the passengers to write notes to let her know it’s a big deal. I didn’t realize the whole plane was going to write notes and hand them to her.” 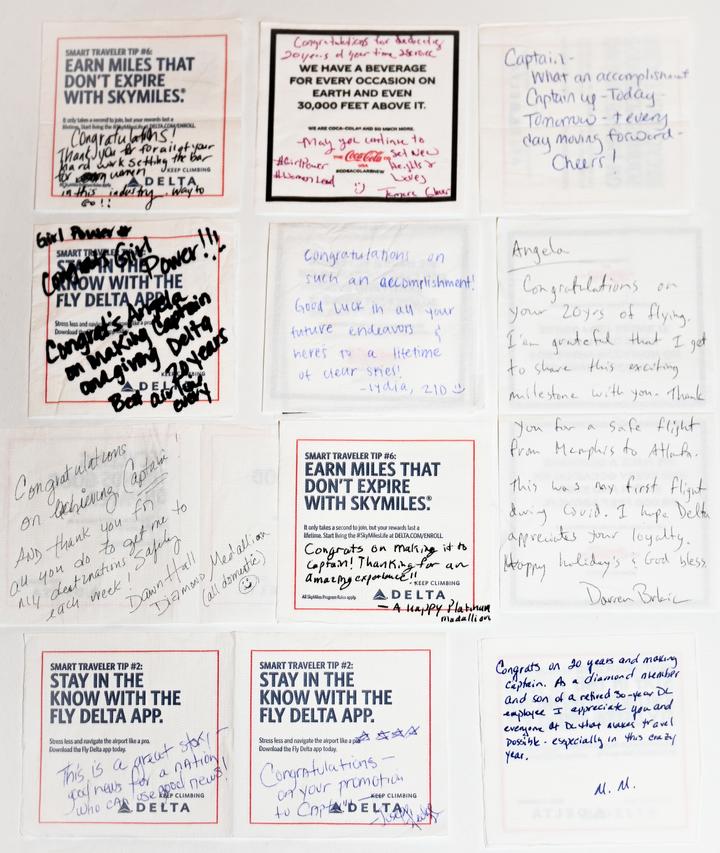 From Medallion Members to those just returning to the skies, Angelia received 54 notes from passengers – each expressing their excitement and gratitude for her. Well over half of the notes contained personalized messages, many of which noted that Angelia is “setting the bar for women” in a career that is predominantly male. In fact, only 1.42% of all captains are female according to the International Society of Women Airline Pilots.

“I was taken aback at how many people took the time to write such personal messages, and having each passenger actually hand the notes to me was totally exhilarating. They welcomed the fact that I am a female who is paving the way for future women,” Angelia said. “I will be on cloud 9 for weeks on end. I love reading them – it’s inspiring to me daily.”

Angelia, who lives in Arkansas but flies out Minneapolis/St. Paul, operated a Boeing 757 and 767 for nearly nine years. She opted to remain a First Officer during that time so that she was able to spend quality time at home with her triplets. With encouragement from her family, she bid for an A320 Captain position this summer.

“When I found out I got the upgrade, it was the feeling I got when I first started at Delta,” Angelia said. “I feel like this is my place – I finally made it. I’m here. I reached my dream.”

In one of the most challenging years in the airline’s history, this experience is reminder of the many Delta customers and employees that are genuine, full of kindness, compassionate and appreciative. It’s humbling to see the goodness in humanity and what we can achieve when we take a few minutes to make a difference in someone else’s life.

More images of the notes can be found at the link here. 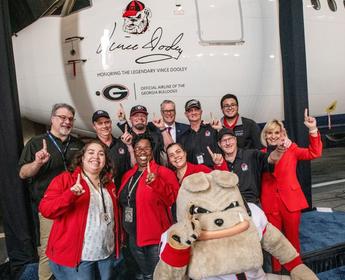