Ship 6301 enjoyed a smooth final arrival on Aug. 20 at its permanent location outside the Delta Flight Museum.

While the move was not far as the initial journey to the Delta Flight Museum in May, it required all of the skill of the Delta TechOps DART team to maneuver into the tight parameters established by the design team. Members of the Airloom Project, an employee-driven, grassroots effort to raise funds and build a permanent home for Ship 6301, were also on hand to share the journey via videos on the group’s Facebook page.

With the retired 747-400 set in position, the rest of the planned outdoor plaza, including an elevator and stair access tower to the main deck, will be built around it. The construction team will transform the inside of the aircraft into an exhibit featuring many highlights, including the Delta One cabin in the upper deck as well as the cockpit. The exhibit will open in 2017.

In June, work began on the site for the home of Ship 6301. The first step was to remove old runway components that had been covered up with dirt over the past 50 years. Once removed, 30-  to 40-foot helical piles, long steel poles that resemble drill bits, were driven into the ground. The helical piles became the foundation for 18-inch thick concrete pads where the landing gears of the massive 747-400 were placed.

On Sept. 9, 2015, Delta retired Ship 6301 after its final flight from Honolulu to Atlanta. The aircraft took its first flight with Northwest Airlines in December 1989. During its career, Ship 6301 logged more than 61 million miles, enough to make 250 trips from the Earth to the moon.

"Every time you see this plane take off or land, it captivates you,” said Tucker George, a Delta flight attendant and member of the Airloom Project. “There’s something majestic about the 'Queen of the Skies' setting sail into the air. This plane means so much to so many people.”

Stay tuned to Delta News Hub and the Delta Flight Museum's website, Facebook page and @dlflightmuseum on Twitter for the latest updates. Delta employees, retirees and members of the public can also get involved in the  Airloom Project. 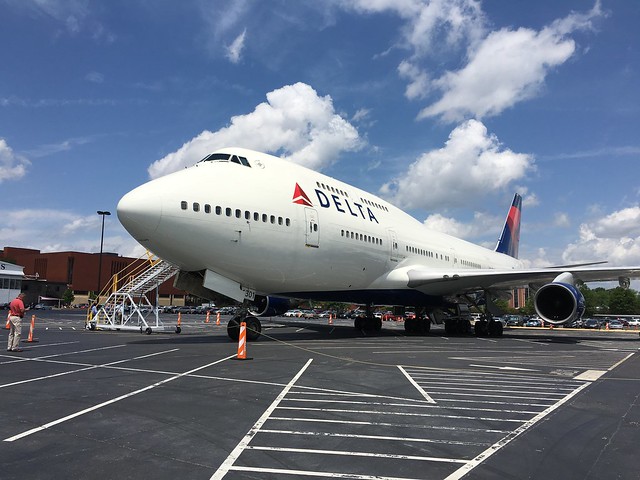