From aircraft maintenance to flight operation to information technology, around 70 teens from the metro Atlanta area now have open eyes to the various elements of the aviation industry and many career opportunities at Delta Air Lines.

The underrepresented youth, ages 13 through 18, participated in this year’s Aviation Career Education Academy and Solo Flight Academy summer programs, which are presented by the Organization of Black Aerospace Professionals (OBAP) and sponsored by Delta.

“It’s initiatives like these that help support our mission to expose future generations to the massive world of aviation, planting seeds that could blossom into new additions to the Delta family in the process,” said Keyra Lynn Johnson, Chief Diversity & Inclusion Officer. “It’s important that those among our underrepresented populations who are interested in aviation have access to the knowledge, experience and resources that can help establish their careers down the line.”

Gifted five days of aviation education, interaction with professionals and hands-on experience, ACE students witnessed the ins and outs of operating an airline.

During a stop at TechOps, mechanics showed the students what it takes to maintain the company’s aircraft, and over at Delta’s IT department they were briefed on cyber security and how STEM plays a major role in the airline’s day-to-day operation.

Both ACE and Solo Flight Academy students, along with nearly 100 participants of other aviation programs across the region, had the unforgettable experience of flying aboard Delta’s 20th Anniversary Dream Flight to the Naval Air Station in Pensacola, Florida, where they shared seats with past ACE graduates who are now professional aviators.

“With the ACE program, we want to light that spark inside of youth to pursue a career in aviation. Though the faces of ACE are pilots, this program shows students that there are so many different aspects to aviation, whether it’s becoming a dispatcher, flight attendant or aircraft mechanic. The opportunities are endless,” said Captain Guy Stallworth, a 22-year veteran at Delta and program coordinator of OBAP’s inaugural Dream Flight. Along with Delta First Officer Jerome Wellons (an ACE Academy alumnus), Captain Stallworth manned the 20th anniversary Dream Flight.

Poised to pursue a career in aviation, 12 students — ACE Academy graduates who were interviewed and selected — received 15 hours of flight training and the opportunity to solo their first aircraft.

“Some of these kids don’t even know how to drive a car yet when they enter this program, so to see their dedication, commitment and ability to deal with the rigors of going from zero to flying an airplane in two weeks is amazing,” said Burke.

The 2019 ACE Academy and Solo Flight Academy programs culminated with a graduation ceremony at Delta’s headquarters in Atlanta Friday, July 19, where the students received recognition and words of wisdom from Delta people, along with certificates for completing their respective programs.

The ACE Academy and Solo Flight Academy are just two of several programs that Delta has a hand in to help create a pipeline for individuals interested in aviation careers. The Propel Pilot Career Path Program provides students at partnering universities as well as qualifying Delta employees with assistance in becoming a Delta pilot.

This past month, Delta also provided more than 600 scholarships to children of Delta employees, members of the military and community partners to participate in the National Flight Academy (NFA) in Pensacola. Each summer, the program includes an interactive, immersive learning experience aboard a 102,000 square-foot simulated aircraft carrier. The students, or “Ambition Experimental Pilots,” complete a series of virtual reality missions that ignite imagination and encourage learning around communication skills, teamwork and the importance of setting and achieving goals. As the official airline of the NFA since 2013, Delta continues to champion youth and inspire them to take a greater interest in aviation and STEM careers. 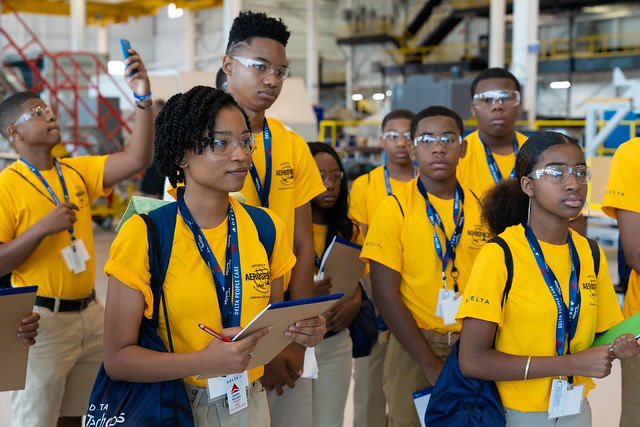