Zidane Dixon was petrified when he first landed in a Delta work/study position as a green ninth grader. “I thought, ‘work? I’m only 14!’” Dixon, now an 11th grader, recalled, a grin stretching from ear to ear. “But I was welcomed with open arms, which helped a lot.” 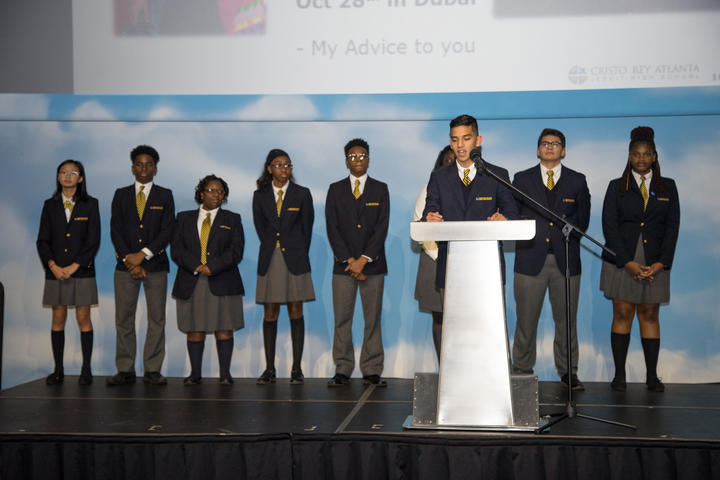 Dixon (pictured above), a member of what will soon be the first graduating class of Cristo Rey Atlanta Jesuit High School, is now plotting a career in mechanical engineering and making excited plans to attend Harvard – or maybe Georgia Tech.

Delta is celebrating its third year of corporate partnership with Cristo Rey Atlanta, welcoming a new group of four high school students each school year. Each student spends five full days a month at the General Offices as part of their rigorous college prep program, and in return, Delta pays Cristo Rey for their work.

“We’re trying to give them challenging opportunities,” said Vashti Canty, Specialist – Global Diversity and Inclusion, who oversees the program on a day-to-day basis. “I don’t want them to just sort and file. They can do PowerPoint. They can do Excel. We need to tap into their potential in order to give them valuable learning experiences and help them grow personally and professionally.”

While Atlanta’s Cristo Rey was founded in 2014, the school has been around in other cities for decades. It boasts a graduation rate of more than 98 percent and a 100 percent college acceptance rate among those grads. It focuses specifically on students from low-income backgrounds in underserved communities – in Atlanta it only accepts those eligible for free or reduced-price lunches – then it works with corporate partners who provide funding and workplace experiences.

Delta’s early partnership was a key step in helping the school gain local credibility in the corporate community, said Bill Garrett, president of Cristo Rey Atlanta. The program now boasts partnerships with nearly all of the area’s biggest companies and organizations, including Coca-Cola, Home Depot, UPS and roughly 100 others.

Meg Taylor, Associate General Counsel – Legal, who played a key initial role in securing the company’s involvement, reflected on the airline’s decision to become one of the founding Corporate Sponsors. 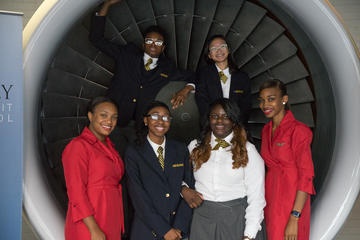 “Letty Ashworth [Director-Community Affairs] and I were both immediately attracted to idea that Delta could help offer an opportunity for life-changing education, skill development and college placement that might not be immediately available to these students in their current environments,” she said.

In the long run, Ashworth added, the program could also serve Delta by molding future leaders and connecting them to Delta even earlier than the company’s undergrad and MBA intern programs. “We’ve learned that it’s never too early to back up the talent pipeline.”

Meanwhile, students enjoy their work/study assignments so much that they obsessively compare notes and wear corporate ID badges even when off campus. “They don’t talk about school at all,” Garrett said. “They talk about their jobs.”

Delta’s partnership with Cristo Rey is just one example of the airline’s commitment to education. In July, The Delta Air Lines Foundation announced it will match donations made by Delta employees, retirees and Board of Directors to education institutions, pre-K through post-graduate, on a 1-to-1 basis up to $5,000 per individual.