SHANGHAI – Boasting the world’s second largest economy, China is attracting more Delta business and leisure passengers who need to connect at Shanghai-PuDong Airport (PVG) for travel throughout China. Along with that demand came a new challenge.

From 2008 until early 2015, Delta operated out of the newer PVG Terminal 2. However, with the expansion of the airline’s partnership with China Eastern Airlines, the number of transferring flights increased. To get passengers from point A to point B more quickly, Delta moved to Terminal 1 in April 2015, shaving an hour off connection times. Still, the solution wasn’t perfect.

“Even after the move, connections at Terminal 1 required about two hours,” said Mariko Isa, Product Manager – ACS Alliances, Asia Pacific. “But that needed to be improved upon to support Delta’s desired growth in China.”

So, Delta set out to design a long-term solution: a concierge program that would facilitate tight transfers from Delta international flights to China Eastern and Shanghai Airlines domestic flights.

Mapping out a plan

Team members from numerous Delta divisions started by designing a transfer assist system. This program would touch nearly every point along the customer’s travel journey. While meet and assist programs exist, this activation went one step further, guiding passengers through a busy terminal in the business capital of the most populous country in the world. 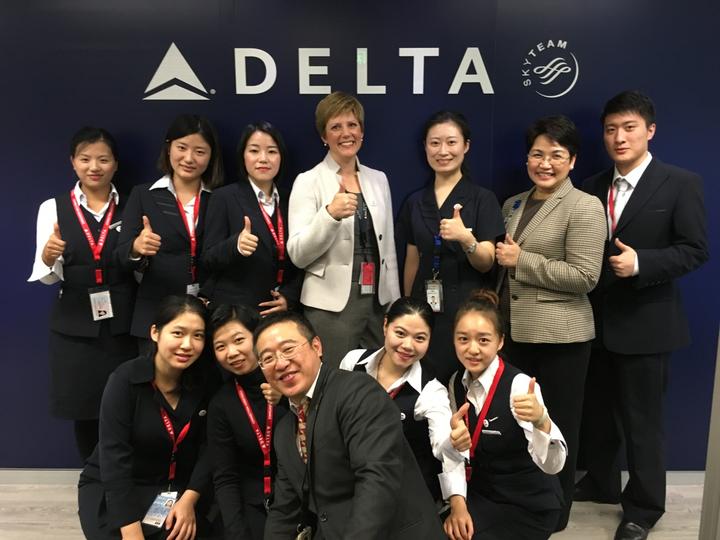 “We started working on the program details immediately after the reduced connection times were approved, just two months before launch,” said Carmen Aguirre, Director-ACS Operations, Asia Pacific. “We knew we could make a Delta Difference for our customers and through hard work and clever maneuvering, our teams made it happen.”

Over two months, the group recruited and hired a team of 16 concierge staff through China Eastern, all fluent in Mandarin and English. Custom-designed training was completed in time to launch the innovative program.

“The new hires were young and most hadn’t worked in the airline industry, but they were smart and willing to learn,” said Sophia Yang, PVG Concierge Team Leader. “My job was to share experiences with them, while helping them to develop their customer service skills.”

The program in action

Once a flight arrives at PVG, the concierge team identifies up to 15 passengers with the shortest time between connecting flights, connections less than 100 minutes, and selects those passengers for escort.

From the passenger side, travelers receive information about the transfer process as soon as they check in, as well as on board the aircraft, through flight attendant announcements and information cards. On board, flight attendants notify travelers with the tightest connection times that an escort is waiting to assist them.

From there, the uniformed agents help Delta customers from the arrival gate to immigration and then on to baggage claim.

Since the start of the program, the team has successfully supported transfer times as short as 45 minutes.

For the unlucky few who miss their tight connection, concierge agents will assist with the rebooking process and accommodations. In unforeseen international transfer scenarios, this group assists passengers with obtaining 72 hour Chinese visas.