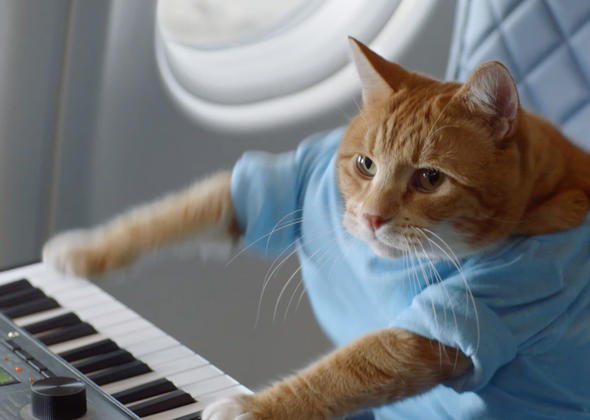 The latest Delta Air Lines safety video is the best thing to happen to the Internet since the cloud. A mash-up of some of the Internet's most-loved memes, the video brings together stars like Keyboard Cat, Dramatic Chipmunk, and a certain Screaming Goat with a penchant for pop music.

Charlie is still biting his brother's finger, the Evolution of Dance evolves, Annoying Orange is – shockingly – still annoying and Overly Attached Girlfriend has her eye on someone new. Will It Blend Guy continues his noble quest to answer the age-old question – will it blend? Delta's original Internet star also makes an appearance. Combined, the Internet personalities featured in the video have gathered nearly 2 billion views on the videos that made them famous.

"We had a ton of fun with this one, and we think our customers will, too. Internet fame is fleeting, but our commitment to the safety of our customers and crew is not," said Mauricio Parise, Delta's director of Worldwide Marketing Communication. "These memes and cameos tap into the zeitgeist as the latest way of capturing our customers' attention for our important safety presentation."

"Delta's meme-tastic new safety video is not only a fitting homage to YouTube as we celebrate its 10th birthday this month," said Stephanie Davis, Industry Director for Travel at Google. "It's also a winning example of how to reach, engage and entertain customers around the world with great video content."

The video can be seen on Delta aircraft beginning May 25.

Delta launched a series of safety videos beginning in late 2012 meant to grab the attention of even the most seasoned travelers by using pop culture references, surprises and guest appearances – all to communicate important safety messages.

Delta Air Lines serves more than 170 million customers each year. Delta was named to FORTUNE magazine's top 50 World's Most Admired Companies in addition to being named the most admired airline for the fourth time in five years. Additionally, Delta has ranked No.1 in the Business Travel News Annual Airline survey for four consecutive years, a first for any airline. With an industry-leading global network, Delta and the Delta Connection carriers offer service to 327 destinations in 60 countries on six continents. Headquartered in Atlanta, Delta employs nearly 80,000 employees worldwide and operates a mainline fleet of more than 700 aircraft. The airline is a founding member of the SkyTeam global alliance and participates in the industry's leading trans-Atlantic joint venture with Air France-KLM and Alitalia as well as a newly formed joint venture with Virgin Atlantic. Including its worldwide alliance partners, Delta offers customers more than 15,000 daily flights, with key hubs and markets including Amsterdam, Atlanta, Boston, Detroit, Los Angeles, Minneapolis/St. Paul, New York-JFK, New York-LaGuardia, Paris-Charles de Gaulle, Salt Lake City, Seattle and Tokyo-Narita. Delta has invested billions of dollars in airport facilities, global products, services and technology to enhance the customer experience in the air and on the ground. Additional information is available on delta.com, Twitter @Delta, Google.com/+Delta, Facebook.com/delta and Delta's blog takingoff.delta.com.