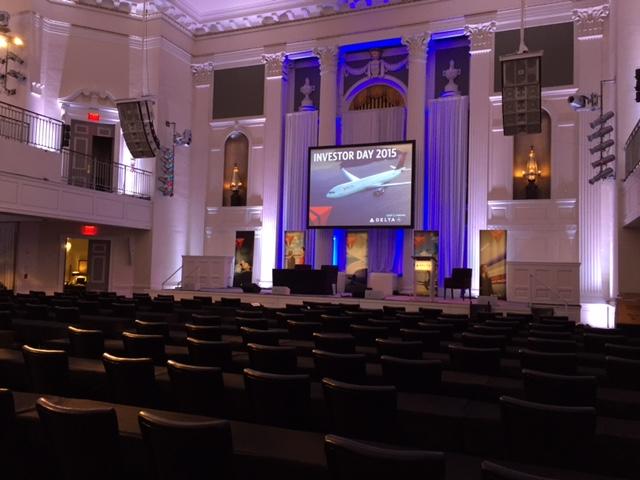 NEW YORK - “Welcome to the Church of Delta.”

That was how Delta President Ed Bastian greeted investors and Wall Street analysts Thursday when he spoke at the airline’s annual Investor Day conference held at a historic church and events space on Park Avenue.

Executives focused on how Delta has consistently achieved or exceeded its goals in its customer service, financial and operational performance. And they outlined how Delta is building a business model that can be profitable over the long term regardless of the global economic cycle.

“It is a privilege to have your confidence and be able to serve our owners because you do entrust us with your capital,” CEO Richard Anderson told more than 200 investors and Wall Street analysts. “And we don’t take that lightly. Much of what we want to do today is grow that confidence level in the marketplace and in the investor base, and continue to pursue higher returns for our owners.”

Delta provided a forecast of fourth-quarter results, announcing an operating margin of 16.5 to 17.5 percent and unit passenger revenues down about 2 percent. Fuel prices will produce a savings of $3 billion next year.

Beyond the numbers, the presentation was centered on several themes:

Delta is being managed to meet long-term goals. Since publicly introducing its long-term financial goals in 2013, “we have consistently outperformed and then raised the targets every year,” Anderson said.

That means never assuming that short-term benefits, like cheaper fuel prices, will last forever. “Are we happy that fuel is where it is at? Yes,” Anderson said. “Should we rely on that? No. We have to build an enterprise that has sustainable cash flows and good profitability at $100 per barrel.”

Delta’s employee culture is a unique driver of its success. “The reason we are so confident in our plans despite the risks that are out there… is because Delta employees deliver results time and time again,” said Joanne Smith, Delta’s Chief Human Resources Officer.

Delta’s culture cannot be replicated, she said. “It is unique to Delta and it is the core DNA driving the airline’s performance.”

The employee engagement scores from Delta’s 2015 survey showed that 88 percent thought the company was a great place to work. “That’s a great result,” she said. “It’s off the charts.”

“Delta is the only U.S. carrier to have ownership interests in every international region,” Bastian said.

That will grow in the future as Delta forges joint ventures with Aeroméxico, GOL and eventually China Eastern, he said.

Innovative investments in technological excellence are paying off. One result of Delta’s focus on technology and operations is the industry’s best reliability.

Maintenance-related cancellations are down 93 percent since 2011, he said, and Delta has had 197 days so far this year with zero domestic cancellations. The next three largest airlines combined have had just 31 domestic cancel-free days. He also pointed out Delta’s 86.1 percent on-time performance rate for the year.

Delta is pursuing even more initiatives to improve its technological excellence, which keeps costs low and drives revenue performance. Anderson cited a new engine shop that will be opening in Atlanta in partnership with Rolls-Royce.

He also noted that Delta is creating a subsidiary called Delta Material Services to provide spare aircraft parts. “We’re going into the parts business,” he said.

Revenue growth comes from flying to the right places and offering customers what they want. Delta is continually adjusting its network to focus on markets where demand for travel is strong, while reducing capacity in weaker regions, said Glen Hauenstein, Delta’s Chief Revenue Officer. And increasingly, that flying is being done on larger aircraft that are more popular with customers.

Delta’s “branded fares,” which provide a range of service levels at different prices, are generating more revenue, which is expected to approach $2.5 billion by 2018.

“We should always have been giving our best customers their choice of seats on the airplane, their choice of cabin,” Hauenstein said. He pointed out that so far this year that the paid passenger loads in first class is 57 percent, up from 45 percent in 2013. The goal for 2018 is to bring that number to 70 percent.

Hauenstein also pointed out that “airfares are still such a great value for our customers.”

Delta looks more and more like a high-quality industrial company. The airline has paid down $10 billion in debt, is rewarding shareholders and has a credit rating just one notch below investment grade, said Paul Jacobson, Chief Financial Officer.

About 50 percent of operating cash flow is spent annually to support the fleet, product, facility and technology initiatives, he said. Those investments drive long-term value for shareholders by making Delta the first choice for customers.

“There is still a lot of opportunity ahead,” Jacobson said. “We have made tremendous strides and we’re not finished. We look forward to continuing this path and this trajectory.”