June's Sky magazine: 'Voice of influence' in Hispanic U.S., beyond 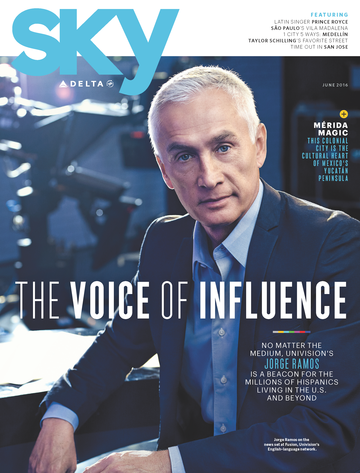 After starting out as a reporter in Mexico City and immigrating to Los Angeles in 1983, Ramos became lead anchor at Univision in 1986. Since then, he has interviewed nearly every major Latin American leader and every U.S. President since George H.W. Bush. His confrontational style got him ejected from a Donald Trump press conference last year.

Ramos’ audience reaches even beyond his 2 million nightly U.S. viewers: Noticiero Univision is also broadcast to 13 Spanish-speaking nations outside of the United States.

“Ramos’ formidable role in the media landscape speaks to the rapidly shifting demographics in the United States,” notes Delta CEO Ed Bastian in his monthly letter in Sky. “When it comes to the burgeoning U.S. Hispanic market, our efforts to forge a bond with customers have been considerable. The most noticeable has been our push to expand Delta’s footprint in Latin American and Caribbean markets, with flights to 32 countries and 57 destinations in the region. We also continue to grow via our unique investment partnerships with Latin American powerhouse Aeroméxico and Brazilian carrier GOL Linhas Aéreas Inteligentes.”

5 Other Things to Know This Month, from Sky: