More than 300 volunteers from Delta, KaBOOM! and the St. Paul community joined forces to build a playground at Highwood Hills Elementary School on Saturday, marking Delta's 19th KaBOOM! build and the airline's second playground in the Minneapolis-St. Paul area. 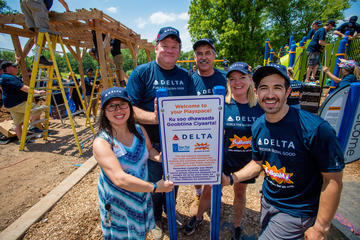 Volunteers — including MSP-based employees as well as employees from Atlanta, Toronto and Vancouver, among others — spent the day assembling the new handicap-accessible playground, picnic tables, benches and more — all of which was designed by Highwood Hills students in April during Design Day. The new playground will bring more than 1,100 kids in St. Paul one step closer to having the play-filled childhood they deserve.

“It’s so important to give back to the communities where we live, work and serve, and the volunteer turnout today demonstrates the Delta spirit of volunteerism,” said Toby Broberg, Delta’s Vice President  – Airport Operations, MSP. “This playground is a true illustration of what’s possible when a community comes together. We’ve built something that will make an impact on generations of young people in the St. Paul community.”

“It was a great day volunteering with Delta and KaBOOM! building a beautiful playground for Highwood Hills Elementary School,” Berg said. “After attending the Delta Global Build in April, we feel like part of the Delta family and were so excited to spend a day with the Delta team giving back to our own community.” 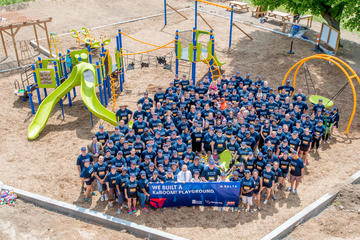 In just six hours, the playground construction was complete and a ribbon cutting ceremony brought the event to a close. Minnesota State Senator Foung Hawj and representatives from Highwood Hills addressed volunteers, and Delta presented Highwood Hills with a surprise check for $20,000 to support the long-term maintenance of the playground.

“This playground means so much to our school and our students. It will provide new opportunities for a fun-filled recess and a welcoming space for all East Side families and those who live in the neighborhood,” said Lynn Pham, Highwood Hills Elementary School Principal. “Thank you, Delta and KaBOOM!, for making this dream a reality for our students.”

KaBOOM! is the national non-profit dedicated to giving all kids — particularly those growing up in poverty in America — the childhood they deserve filled with balanced and active play, so they can thrive.