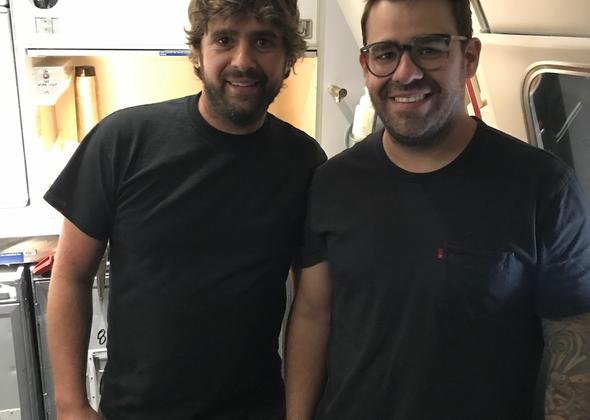 Delta recently announced a partnership with Los Angeles Chefs Jon Shook and Vinny Dotolo to bring their renowned cuisine to the skies. To prep for their onboard debut, the culinary duo took the skies Friday to learn more about serving up hand-crafted dishes at 30,000 feet.

“It’s amazing to learn first-hand all of the little details that go in to getting customers’ food in the sky,” said Shook. “We were able to watch the flight attendants go through each step leading up to serving the customer, which really gave us a clear understanding of how everything happens on board and how our food will be served.”

On a coast-to-coast flight from Los Angeles International Airport to New York’s John F. Kennedy International Airport, Shook and Dotolo familiarized themselves with service delivery procedures, reviewed galley space and restrictions, and talked to the working crew members to get up-to-speed with every detail of the process — from boarding to plating to delivering to customers.

“Jon and Vinny were thoughtful and curious throughout the whole flight, really taking the time to understand how to make this a great experience for flight attendants and customers,” said Debbie Bunch, LAX-based flight attendant. “They seemed so excited to partner with Delta and genuinely wanted to know what tools flight attendants need to provide exceptional service to our customers.”

“The experience definitely changed the way we plan on approaching bringing local fare to the skies,” said Dotolo.

Shook and Dotolo are behind some of the most sought-out restaurants in town and, beginning in December, Delta customers on flights departing LAX will enjoy their cuisine on flights to JFK and DCA.  The new menus will feature local, fresh and seasonal ingredients, and will be reflective of the fare served at several of the duo’s most popular establishments including Animal, Son of a Gun and Jon & Vinny's, which was recently named one of the best Italian restaurants in L.A. by TimeOut Los Angeles.

Similar to the meals Union Square Hospitality Group creates daily for Delta One customers out of New York, Shook and Dotolo will prepare the new menu selections at a dedicated facility in Los Angeles. The freshly made meals will be transported to LAX each day from their catering company, Carmelized Productions, to ensure customers experience restaurant level service in the skies.

The new partnership with the two L.A. chefs and entrepreneurs continues more than a decade of Delta bringing star-quality food and beverage programs to its flights. In addition to partnering with Shook and Dotolo, Delta also partners with Atlanta-based chef Linton Hopkins and New York-based Union Square Hospitality Group. The chef-driven menus highlight the airline's industry-leading focus on providing seasonally and regionally-inspired cuisine to customers.

Additionally, Delta partners with Master Sommelier Andrea Robinson to create a robust wine program that also incorporates a seasonal approach pairing perfectly with the airline’s Delta One menus. This year, Robinson has sourced a number of locally-made wines from small, artisanal wineries that bring to the tray table a flavor and body uniquely their own.