Larry Fitzgerald on the intersection of sports, business and philanthropy

NFL great Larry Fitzgerald reflects on his journey to the board room and his passion for philanthropy in the fifth episode of Gaining Altitude with Delta CEO Ed Bastian.
DELTA NEWS ON THE GO. Subscribe and follow.

Delta CEO Ed Bastian welcomed Larry Fitzgerald for the fifth episode of Gaining Altitude, exploring the NFL great’s philanthropy work and how he’s approached his transformation from athlete to businessman.

Before joining Bastian for a conversation worth navigating on Thursday afternoon, Fitzgerald stopped by South Atlanta High School to meet students and present a mobile computer lab in partnership with Delta. He also took a few moments to get to know the football team, who just made the playoffs, and share some wisdom.

Delta’s S.V.P. of Global Brand Marketing, Molly Battin, joined Fitzgerald to present the school with a joint contribution from Delta and the Larry Fitzgerald Foundation’s First Down Fund. The computer lab consists of 30 Microsoft Surface Pro 7+ devices along with a mobile charging cart that allows for multi-classroom use and for the devices to be checked out. 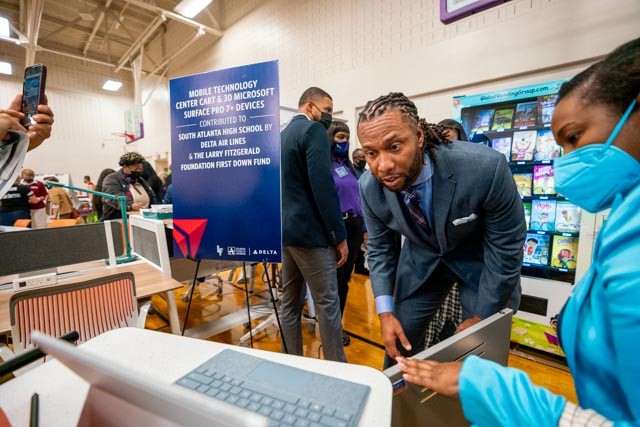 Connecting with these students to share what it means to be great citizens and community servants is a cause dear to Fitzgerald, whose foundation works to provide students in underserved communities with technology that can help them succeed. 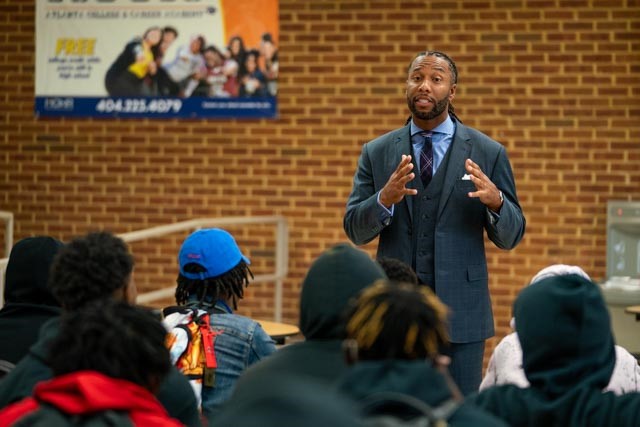 The Larry Fitzgerald Foundation also supports breast cancer research in honor of the star’s late mother, representing one part of Fitzgerald’s transition to a new career off the field.

The Gaining Altitude discussion with Bastian zeroed in on Fitzgerald’s journey to the board room, which began in 2008 during a chance meeting with Frank Bisignano, now the CEO of Fiserv, at a Phoenix Suns-New York Knicks game. The two struck up an instant and lasting friendship, with the executive inviting Fitzgerald to work as an intern during the offseason. Since then, Fitzgerald has pursued internships in everything from venture capital to private equity to real estate as growing and learning experiences.

“You name it, I was just trying to get exposure to as many different fields as I could,” he said, adding that it was an opportunity to network and build relationships that would prepare him for life after football.

In addition to his philanthropic ventures, Fitzgerald is now part-owner of the Suns and serves on the board of directors for Dick’s Sporting Goods – a role he initially found intimidating, especially given the challenges of remote work during the COVID-19 pandemic.

“I think it’s just a great learning for everyone, that no matter how successful you are, how many times you’ve been on the world stage, there’s still things to go learn,” Bastian said. “You learn about yourself from a whole new vantage point.”

A DAD FACING THE PANDEMIC

Fitzgerald is first and foremost a proud dad and organizes his schedule around their needs.

“I want to make sure I’m available for them emotionally, psychologically, spiritually and physically, because they need that,” he said.

The pandemic challenged the entire world, as well as Fitzgerald as a parent, athlete and businessman. He enjoyed the close time he was able to spend with his children and now cherishes his car rides with them to and from school as an opportunity to learn about their days.

Fitzgerald recalled the uniquely strange experience of playing NFL games to empty stadiums – and finding motivation in knowing how elated fans were to be able to enjoy sports during such a difficult time.

For the first time in decades, Fitzgerald is watching from the sidelines, proudly supporting the Arizona Cardinals and Phoenix Suns and learning about the organizational side of a sports franchise in his role as a team owner. Even though he’s hung up his own cleats, Fitzgerald loves the role sports can play as a “great unifier.”

“People don’t worry about what religion you are, what race you are, what your sexual orientation is,” he said. “It’s just, we’re here to support the team, we’re all together, and I love that.”

Gaining Altitude is an enlightening series of conversations worth navigating, connecting people while building understanding around the globe. Bastian hosts the one-on-one discussions with insightful leaders, covering topics including diversity, equity and inclusion, servant leadership, entrepreneurship, sustainability and mental health.

Visit delta.com/GainingAltitude to discover all the episodes, sign up for podcast updates and sign up for live episode reminders.

You can also check out the first two episodes of Gaining Altitude on board your next flight in the series section of Delta Studio®. 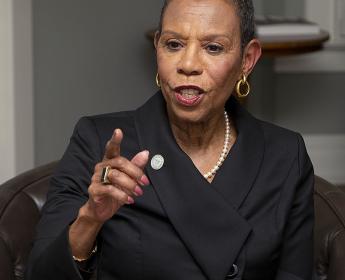