Learning to fly from the ground up 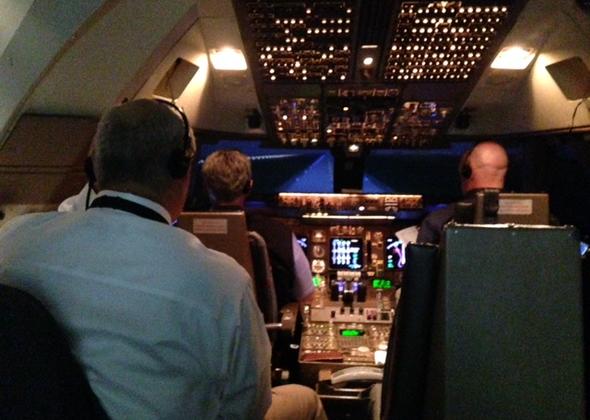 They cost millions to build and require great dexterity and judgment to “fly,” but they never leave the ground. They’re flight simulators, and they’ve played a critical role in aviation history and at Delta.

And they continue to be essential tools for training pilots and ensuring passenger safety.

Today’s simulators, which stand atop hydraulic or electric “legs” to simulate motion, offer a much wider scope of exercise possibilities while reducing the need for extensive flight training in an actual aircraft. Doing so significantly reduces costs and often simulators are the only way to test new equipment, procedures and flight conditions without compromising aviation safety.

While a simulator is used to test and prepare for the real world – for normal flight experiences – it’s also valuable to use in preparation for abnormal situations.

“Although it’s impossible to replicate the airplane perfectly, the simulator allows pilots to practice emergency situations that they wouldn’t be able to replicate in the actual airplane,” said Ryan Bradley, an MD-88 First Officer.

New Delta pilots – or those transitioning to a new aircraft type – train in a simulator as part of a six week course, which also includes a mix of  briefings and computer-based learning.

Delta has 28 full-flight simulators on site – for all of the mainline fleets, with the exception of the B717, which will be installed next year. 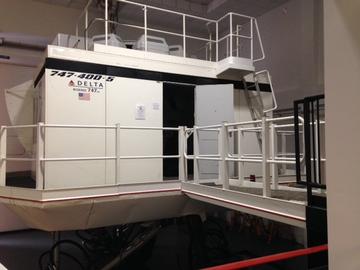 Delta regularly updates its “fleet” of simulators. An A330 simulator is being added later this year to support training for the growing fleet. Because Delta’s Boeing 747-400 fleet is being retired so, too, is its group of full-flight 747 simulators.

The tool has come a long way since its origins.

In the 1920s, Ed Link, who would become a pioneer in aviation, took flying lessons. The lessons were expensive, and Link felt there had to be a better way to teach flying. Within a year, he’d designed the first rudimentary flight simulator, which he used to teach his brother to fly.

Although Link tried to interest a number of companies in the device, no one saw a future for it. Discouraged, he took his simulator around the country and sold rides for 25 cents but a series of airplane accidents led the Army to take an interest in Link’s trainer.

In the 1940s simulators were adopted by commercial operators as well. The first airline simulator was manufactured for Pan American Airways. The Boeing 377 simulator didn’t move and had no visual system, but the cockpit was an exact replica of the aircraft down to the last detail.

In the 1960s simulator movement came into play, and a decade later computer-generated graphics were introduced. Three-dimensional landscapes were developed, which today are projected visual scenes presented in high resolution and include real world images.

Nowadays there are many types of training simulators, varying in complexity and function, including PC-based, instrument only, fixed (with graphical capabilities but no motion) and full-flight (with motion platforms that move to provide physical sensations of flight and are usually aircraft-specific and highly functional).

The machines require a great deal of human knowhow. Maintenance folks handle the device’s multilayered upkeep including electronics, hydraulics, mechanical and computer systems. Engineers design, analyze, test and implement modifications to the devices to make them mirror the experience of flying Delta’s aircraft as closely as possible.

“We handle a lot of technical stuff to provide the ultimate virtual reality,” said Bob Aguglia, an industry veteran and aerospace engineer in the Simulator Support Department who played a hands-on role in the development of the Boeing 747-400 simulator. He even worked with Link years ago.

The Delta Flight Museum in Atlanta houses a Boeing 737-200 simulator, which is the only one of its kind in the U.S. available for public use. Reservations are required for 1-4 people per experience, ages 16 and over. (Not recommended for pregnant women or those with back issues or motion sickness.) Simulator guests receive a 10-minute preflight briefing, 45 minutes of flight time and a 5-minute review at the end of the trip.