Investor Day 2015 is now a wrap. Thank you for viewing our live blog, as well as our tweets on @DeltaNewsHub. A replay of the webcast will be available at ir.delta.com, as well as the presentation materials.

12:02 p.m. ET: CFO Paul Jacobson’s closing remarks: “There is still a lot of opportunity ahead. We have made tremendous strides and we’re not finished. We look forward to continuing this path and this trajectory." 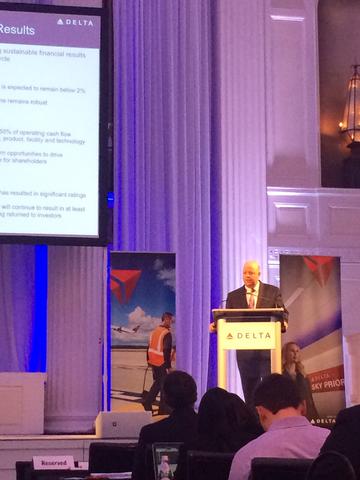 11:41 a.m. ET: Delta’s capital strategy is straightforward – 50 percent of operating cash flow is spent annually to support the fleet, product, facility and technology initiatives. Those investments drive long-term value for shareholders, Jacobson said, by making Delta the first choice for customers.
Some numbers he has thrown out:

“The refinery this year is a tremendous success story,” he said.

“There is obviously a lot of uncertainty in the global market,” he said. “But if we can’t drive sustainability at uncertain times, then nothing has changed.”

Despite the global volatility this year, Delta has produced strong financial performance, better customer service and “record reliability that no airline the size of Delta can touch,” he said.

11:08 a.m. ET: Hauenstein addressed how Delta has been working to reward its best customers. 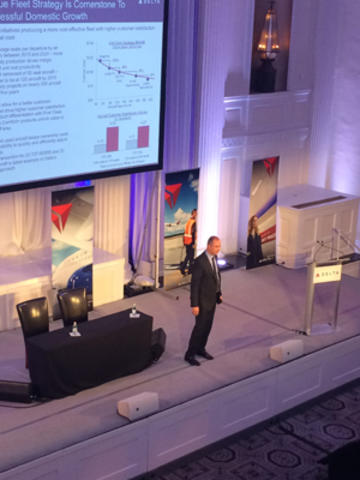 He pointed out that so far this year that the paid passenger loads in first class is 57 percent, up from 45 percent in 2013. The goal for 2018 is to bring that number to 70 percent.

Glen explained how Delta now provides a range of products at different price points for customers – from Basic Economy for the most price-conscious traveler; Main Cabin for a traditional experience; Delta Comfort+ for a higher level of service; and First Class for premium fliers.

“Air fares are still such a great value for our customers,” he said.

10:58 a.m. ET: Glen Hauenstein, Delta’s Chief Revenue Officer, has now taken the stage at Investor Day. He mentioned meeting with some investors the previous evening. “The general resounding theme I got was that you’ve done a great job in the last 5, 10 years, but how are you thinking about the next 5-10 years?”

The fact is, he said, he gets excited when he thinks about the future. “We’re just getting started.”

One strategy is to optimize Delta’s capacity by focusing on hub strengths to serve high-revenue markets over the short, medium and long term. Matching the destination with the right product is essential, he said. 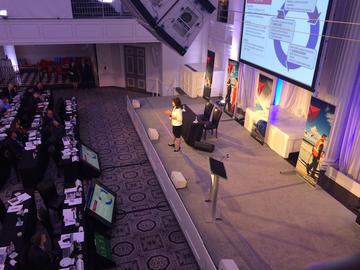 “The reason we are so confident in our plans despite the risks that are out there… is because Delta employees deliver results time and time again.”

Delta’s culture cannot be replicated, she said. “It is unique to Delta and it is the core DNA driving the airline’s performance.”

Smith cited what Delta management calls the “virtuous circle” – when you take care of your employees, they take care of your customers, who reward the airline with their loyalty and return business. That in turn rewards shareholders, who invest their capital in the company and allow for even more investment in people and customers.

“Our employees want to win,” she said. “It is core to their values. So we keep raising the bar higher.” 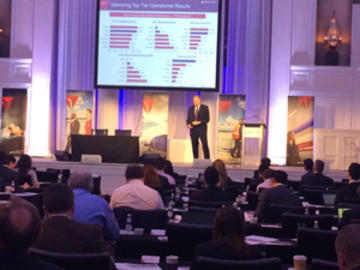 He also pointed out Delta’s 86.1 percent on-time performance rate for the year.

The secret? “We’re obsessed with continuous improvement.” Investment in top maintenance performance and customer service excellence is bearing fruit, along with a commitment to innovation and flexibility across Delta’s operation.

The Q&A session has ended and it’s time for a break. Next up: Chief Operating Officer Gil West.

9:46 a.m. ET: Anderson used a question about guidance to discuss the balance between investment in the business and shareholder returns.

“When you look at what we were able to do in 2015, it was pretty indicative. We made China Eastern an investment in the future. But at the same time we took our shareholder returns from $1.4 billion to $2.6 billion.”

“So we want to make sure the free cash flow yield is superior to the S&P, but at the same time you want us to have sustainability over decades. We always have to strike that right balance of investment back into the business so we have growth platforms and larger expansion platforms.

I think our track record on those tradeoffs is incredibly strong.” 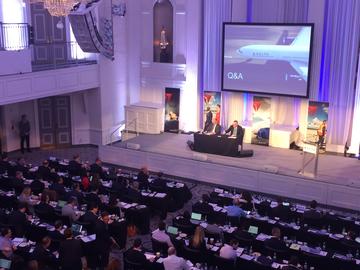 “Clearly the China investment is a long-term investment. We have to participate in the growth of the China market. It is the fastest-growing aviation market. The way I describe it to employees, it’s like our first joint venture with KLM. We started with 3 flights a week from Minneapolis-St. Paul to Amsterdam. Today it’s three a day. You will see that type of growth over time.”

9:26 a.m. ET: Q&A session with Anderson and Bastian begins. When asked about Delta’s new engine shop in Atlanta, announced earlier this year, Delta CEO Richard Anderson said that, “The most important thing is to continue with the development of knowledge and capability of our technical operations. We want to be sure that we have generations of that capability coming.”

Delta’s technical expertise “gives us the lowest capital cost and the highest reliability.”

“The Delta people are the very, very best, there is no question about it. All airlines have similar tools but they don’t have the magic of Delta people.”

He and Delta CEO Richard Anderson are now taking questions from the audience.

9:18 a.m. ET: On the international front, Bastian said Delta is focused on its immunized joint ventures and equity investments that allow the airline to provide high-quality options and a broad global network. “Delta is the only U.S. carrier to have ownership interests in every international region.”

He added that while some international regions are currently weak, he is taking a long view. Looking out past 24 months, he sees solid growth opportunities overseas. China, for example, will be the fastest-growing international market and Delta has a partnership and equity stake in China Eastern, which has a major hub in Shanghai.

“We’re going to be very well-positioned to participate in those markets.”

9:11 a.m ET: Looking ahead to 2016, Bastian forecast that Delta will save $3 billion on jet fuel. He also said that he expects to see the fifth consecutive year of margin expansion, with the first quarter margin forecast to grow about 8 points. 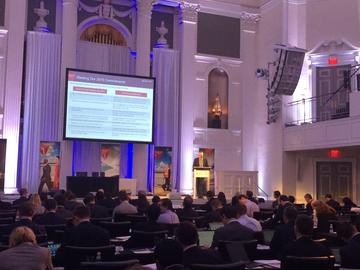 Capacity will be flat overall, at 0 to 2 percent growth. Growth will be focused on markets with strong demand, like the U.S., UK, Mexico and the Caribbean, while reduced in weaker markets like Brazil, Japan and the Middle East.

And he noted the fifth year in a row that Business Travel News named Delta the No. 1 airline for corporate travelers. “This is a very important survey.”

9 a.m. ET: “Welcome to the church of Delta.” That was Delta President Ed Bastian's opening line as he noted the location of the event, at a historic church on Park Avenue.

He said that when it comes to Delta’s foundation, three things come to mind – consistency, durability and positioning for long-term growth. Among Delta’s accomplishments in 2015 are the industry’s best operational performance, a $1.3 billion increase in pre-tax income, keeping non-fuel costs flat and three upgrades by rating agencies that have put Delta one notch below investment grade.

“This is truly a well-oiled machine. Every year we wonder if we can get better, and we keep raising the bar.”

8:55 a.m. ET: Richard wrapped up by thanking investors for their confidence and letting them know that he considers them part of the Delta team. He highlighted the rest of the speakers with one of his favorite quotes: “At Delta we hunt in a pack.”

Next up: President Ed Bastian.

8:51 a.m. ET: While the price of fuel is low, Anderson cautioned that Delta never assumes it will stay that way forever. He builds the budget with an assumption that fuel prices will be 25 percent higher, and wants to prove that the business can operate at $100 per barrel prices.

“Now, are we happy that fuel is where it is at? Yes. Should we rely on that? No. we have to build an enterprise that has sustainable cash flows and good profitability at $100 per barrel.”

8:47 a.m. ET: On Delta’s fleet strategy, which is a mix of new and used aircraft: “We have a large fleet of airplanes that don’t carry a monthly payment. When we hit a down cycle we don’t have those fixed costs. It’s easy to park MD-88s. It’s also easy to fly them when you’re in an up cycle. That gives Delta variable capacity," said Anderson. 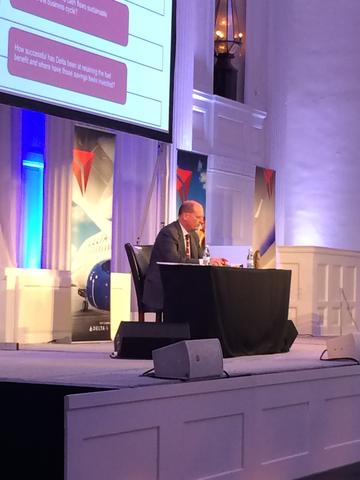 “Our philosophy is we’re going to keep an airplane for 30 years.”

8:40 a.m. ET: Anderson compared where Delta was in 2007 to today. In 2007 Delta had a hub in Atlanta, a hub in Cincinnatti that was too large, and a hub in Salt Lake City. Today, thanks to our merger and our international partnerships, Delta also has hubs in Detroit, Minneapolis, Seattle, New York-LaGuardia, New York-JFK, Paris, Tokyo, Amsterdam, London-Heathrow, and is looking ahead to building hubs in Mexico City, Sao Paulo and Shanghai.

“What that has done is given us a global network that de-risks the business.”

8:35 a.m. ET: From CEO Richard Anderson’s opening remarks:  “It is a privilege to have your confidence and be able to serve our owners because you do entrust us with your capital. And we don’t take that lightly. Much of what we want to do today is grow that confidence level in the marketplace and in the investor base, and continue to pursue higher returns for our owners.

“If anything it is more intense working at Delta now. I would say that our business plan processes have gotten more and more rigorous over time.”

8:15 a.m. ET: The Delta News Hub team is going to be liveblogging today's 2015 Investor Day presentation, which begins at 8:30 a.m. We’ll also be tweeting out updates @DeltaNewsHub. The live webcast of the event can be accessed here. The online replay will be available at the same site shortly after the webcast is complete until Jan. 16, 2016. The presentation materials can be accessed at ir.delta.com. As is always the case with financial presentations, highlights include forward looking statements subject to risks, and results could differ materially. Please go to ir.delta.com for more information.