Delta was recognized by the Los Angeles City Council on Friday with a resolution for its commitment to LA and for its culture of caring for its employees, customers and communities.

The idea to recognize Delta initially came from LA-based Delta Sky Club employee Bridget Nelson. Bridget contacted LA City Councilmembers Mike Bonin and Mitch O'Farrell to share the idea. The councilmembers ran with the idea and brought forth a resolution recognizing Delta "for its invaluable contributions to the City of Los Angeles driven by strong core values that include taking care of the communities it serves" and noted that Delta "has proven to be an airline that has a culture of service from the heart," among many other accomplishments, investments and community service projects and partnerships that were named. The resolution was signed by councilmembers representing each of the 15 LA City Council districts, as well as LA Mayor Eric Garcetti. 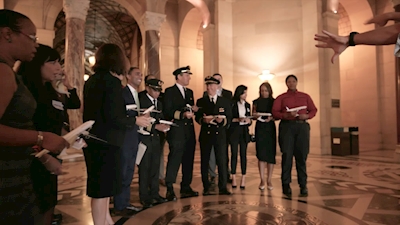 "Our team in Los Angeles has boldly taken on some of the most challenging projects we have attempted in our history, including relocating 21 airlines and our $1.86 billion redevelopment of two terminals at one of the world's largest operating airports," said Delta CEO Ed Bastian. "But this resolution goes directly to the core of who we are – an airline that cares for our people, customers and the communities we serve and that connects the world better than anyone else. Congratulations to the entire LA team for this well-deserved recognition."

During the meeting, Councilmembers Bonin, Joe Buscaino and O'Farrell shared remarks in support of the resolution.

"Today we are celebrating Delta Air Lines, which is one of the best partners we have in that effort [to improve the passenger experience] – one of the best friends the passenger has at LAX. They are doing amazing work making sure the passenger experience is transformed at the airport," said Councilmember Mike Bonin. "Delta has not just been a great partner in our modernization efforts at LAX - they have been a great corporate partner in LA. They're active in the community and have partnered with many groups and organizations in our region."

Ranjan Goswami, Delta's Vice President – Los Angeles, attended the city council meeting alongside a cross-divisional group of LA-based employees. In his remarks to the council, he thanked the councilmembers and applauded Delta's local team.

"It was important to me and the entire leadership team here in LA that our team members join us here today, because this day is about them," Ranjan said. "Without these people standing around me, none of what we have built here in LA together would be possible. The people standing alongside me are a force. Together, with the backing of our 80,000 people worldwide, they have made LA a better place for us all."

Throughout the presentation, Delta people were recognized for the work they've done to build a better LA. They were recognized for supporting Wellness by building homes with Habitat for Humanity in support of affordable housing for Angelenos, by donating blood for those in need through the American Red Cross, raising money to support Angelenos living with HIV/AIDS through AIDS Walk LA, walking alongside members of LA's LGBTQ community with LA Pride, promoting health and wellness for the youngest Angelenos at Children's Hospital Los Angeles, impacting young lives through Covenant House California and helping the food insecure through Los Angeles Regional Food Bank. They were recognized for supporting Education by teaching students entrepreneurship and financial literacy through Junior Achievement of Southern California, teaching kids life skills through YMCA of Greater Los Angeles, and building safe places to play with KaBOOM!. They were also recognized for supporting the Military and veterans of the US Armed Forces through Delta's partnership with the Bob Hope USO and the recent $500,000 donation for their new facility, ensuring a brighter future for kids by providing books and toys through Marine Toys for Tots, and supporting veterans and their families through the Long Beach VA Fisher House. 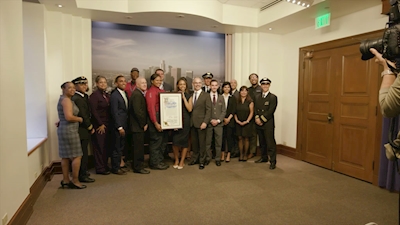 "These are the people who help Angelenos bring the products, services, content and ideas made in LA to the world," Ranjan continued in his remarks to the council. "To say I am proud of them is an understatement."

Since 2009, Delta has been the fastest-growing carrier at LAX and has invested billions of dollars in products, services and technology to enhance the customer experience in Los Angeles and across its network. These investments include adding free Main Cabin meals on select coast-to-coast routes, free mobile messaging, free in-flight entertainment, upgraded Main Cabin snacks, the addition of sparkling wine, access to Wi-Fi on nearly all flights, enhanced blankets and refreshed Flight Fuel food-for-purchase options. Recent upgrades to the Delta One in-flight experience include new chef-designed Delta One menus curated by Jon Shook and Vinny Dotolo for flights from LAX, refreshed TUMI amenity kits with Kiehl's products, and an Alessi-designed collection of serviceware. Delta launched direct service from LAX to Amsterdam and Paris in June in partnership with Air France-KLM, providing the most extensive time of day coverage to Europe and over 118 destinations in Europe, the Middle East, India and Africa. The airline also deployed its new Airbus A350 aircraft featuring the Delta One Suite and Delta Premium Select on the LA-Shanghai route in July.