Love is in the air: Customer pops question at 30,000 feet 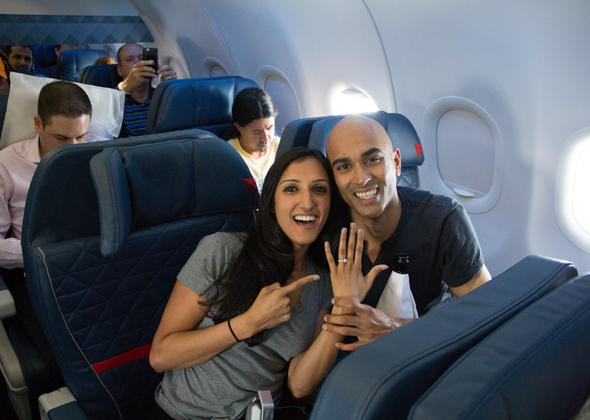 Delta customer Deepum Patel and girlfriend Neha Chakravarti closed their long-distance dating gap for good this week on Flight 1500 from Atlanta to Boston. 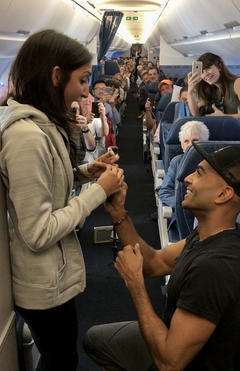 Air travel has sustained their relationship for years, so it was fitting they found a silver lining in the skies. Flying typically meant having to leave one another, as Chakravarti finished dental school in Pennsylvania and Patel worked in Atlanta. For the future, Patel wanted to create a happy memory they would remember every time they boarded a plane together. He decided to propose on a Delta flight.

Patel and his girlfriend planned to take a three-week trip to Europe and were laying over in Boston before arriving in Reykjavik, Iceland. Patel reached out to In-Flight Service, Delta’s flight attendant group, to help plan the big moment on the way to Boston. “I knew that I could trust you guys and you would take care of us,” he said.

Base Director Timithia Cofer coordinated with her department and Airport Customer Service in Atlanta while and Sarah Tronnes coordinated in Boston to organize a proposal that would exceed the couple’s dreams. Patel drafted cards to be distributed to customers asking them to take pictures and videos with their phones when he popped the question.

Shortly after the plane reached 30,000 feet, flight leader Brittanie Grant called for Dr. Chakravarti to come to the front of the plane. The flight crew had staged a need for medical assistance. Patel, who was pretending to be asleep, joined Chakravarti and, in the spirit of their love for music festivals, where they met, turned on their favorite song and asked Chakravarti to dance her way through life with him. On one knee, he said he wanted them to grow old together. 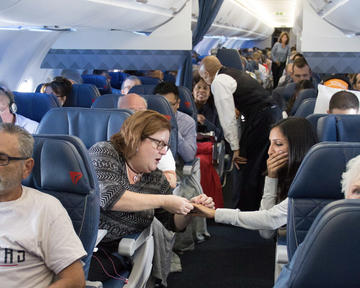 The front cabin was given champagne to toast the future Mr. and Mrs. Deepum Patel. Surrounding customers shared their own stories about long-lasting marriages and wished them the same luck. “I’ve been married 61 years, and it’s worth it – it just gets better,” the woman seated in front of them added.

The pilot congratulated the couple with words Patel wrote: “These two lovebirds have kept up a long-distance relationship with the help of Delta for nearly two years. The Delta family is honored to be part of this very special occasion, and the future groom has kindly asked me to remind you to call the special people in your life today and tell them how much you love them,” he said.

The now-fiancés were greeted upon arrival in Boston by Delta employees with balloons, gift bags, a bouquet, and a corsage and boutonniere made from orchids, Chakravarti’s favorite flower.

A flight attendant commented on the moment: "The cabin was filled with warmth, and our Delta family is thankful we could celebrate something so sentimental." 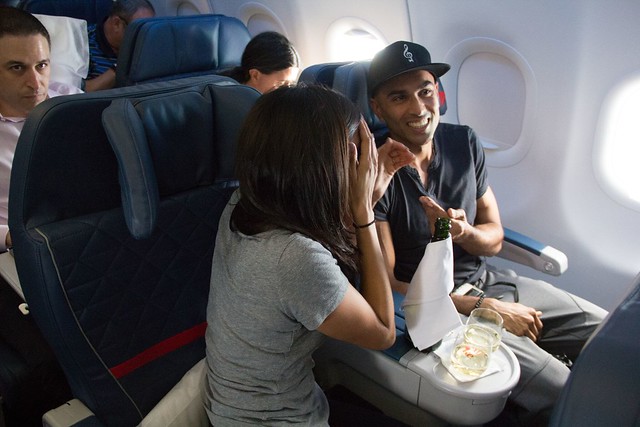