When travel enthusiast Ken Nilsen finally achieved Diamond Medallion, Delta’s elite frequent flyer status, he thought of no better way to celebrate than with his girlfriend Tracy Bellman in Paris. Little did Tracy know they would be celebrating more diamonds than just Ken’s SkyMiles status – he popped the question in view of the Eiffel Tower.

Ken and Tracy tied the knot this week by walking down the aisle – the aisle of a Delta Connection flight, that is.

The couple said “I do” Tuesday between Cincinnati, where they live, and Ronald Reagan Washington National Airport in D.C. alongside their children and 10 of their closest friends. Delta emp

loyees pulled out all the stops to ensure it was a special day.

“I’m in the wedding industry,” Tracy said, who owns a bakery. “I’ve seen it all, and we just wanted to do something different and uniquely us. Plus, we love Delta.”

“She’s the creative artist and I’m a nerdy actuary, so we’re very different,” Ken added, laughing. “Something that we’ve always had in common was travel, so getting married on a plane just seemed to be the perfect fit.”

The two are known among their friends for taking “crazy, long trips” around the world, and Ken is a self-proclaimed Delta addict – loving everything from the customer service to the on-board service.

“I’ve always felt like the journey was just as much a part of the adventure as the destination,” Ken said. “Everyone at Delta is always so helpful, and I’ve always had a positive experience … I don’t even know if I could fly other airlines now.” 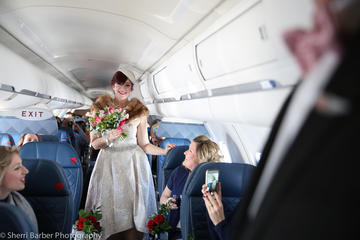 When Tracy said that she felt the same way about loving the journey, Ken knew she was the one for him. The couple once traveled to Cape Town, South Africa – a nearly 24-hour long trip – for just a few days, and when her friends asked why they did it, she told them, “What’s better than watching movies while people bring you food and drinks?”

On-board service is a particularly special part of Delta’s commitment to giving its customers the best the of what air travel has to offer – including a thoughtfully selected wine list by Delta’s Master Sommelier Andrea Robinson, a seasonal rotation of its Delta One menus, TUMI amenity kits, free in-flight entertainment and more.

Ken said their friends expected he and Tracy would elope in Las Vegas or have a destination wedding, but they didn’t want to inconvenience their friends, so getting married on Delta – and buying out first class for the wedding party – was the next best thing.

Delta’s team at CVG, led by Airport Customer Service Station Manager Christy Blackburn, ensured the couple’s day kicked off with a special start by picking them up at security in an airport “wedding limo” – a golf cart with bundles of white balloons– to take them to their gate. They also gave the couple monogrammed Delta blankets as a special memento from their trip. 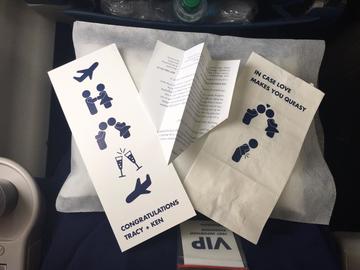 While the venue might be considered unconventional, Tracy and Ken also incorporated some traditional aspects to their wedding. Prior to boarding, a member of the wedding party placed an invitation on each seat. Tracy wore a wedding dress, as well as something borrowed – a pair of Delta wings.

Once in the air and the wedding party had their drinks, Ken and Tracy walked down the aisle and said their vows, just as the plane sailed over the northwestern border of Virginia.

When the flight landed in D.C., customers lined up on either side of the gate area cheering and blowing bubbles as Ken and Tracy walked down a carpet covered in rose petals. Delta Airport Customer Service agents escorted them around the airport for photo ops, and then to the Delta Sky Club, where the airline surprised them with champagne, Delta-branded goodies and a cake topped with a model Delta jet. 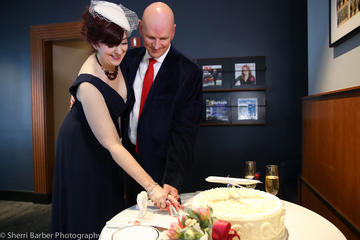 “We’ve all been so excited about Tracy and Ken’s big day,” said Lolita Howard, Operations Station Manager, DCA. “When we first got their email, we couldn’t believe they wanted to spend it with us. So many people have volunteered to be involved, and we just wanted make it as special as possible – things like this just make your heart feel good.”

Delta’s DCA team also catered a lunch for the reception and gave each member of the wedding party a Delta-branded mug engraved with “Ken + Tracy Jan. 31”. The entire day went off without a hitch, Ken said.

“We got this impression that, in addition to [Delta people] making our day, it brightened up their days too. We were just overwhelmed and appreciative of all the support and enthusiasm,” Ken said. “Our guests really got to see what our love for Delta is all about.”

The couple flew home to Cincinnati after the wedding, but not for long. In the weeks following, they plan to travel to Cozumel, Denmark, Las Vegas and then to back to Paris and Cape Town to celebrate the best way they know how – by traveling. 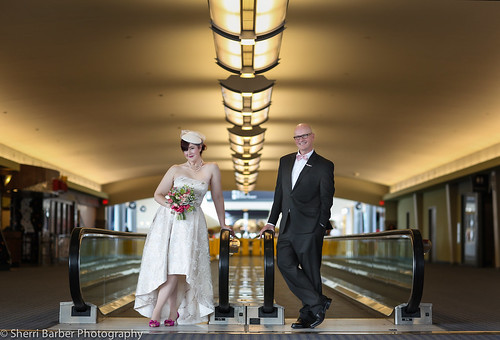