Readers of this month's Sky magazine get a unique taste of eastern culture – from Japan to Indonesia – as the issue features five Asian destinations that are off the beaten path.

"Asia looms large in Delta's future, as our customers increasingly flock to cities across the continent as they travel for business and leisure," notes Delta CEO Ed Bastian in his monthly letter in Sky. "Through Delta's direct service and our partners, customers can access more than 90 destinations throughout the Asia-Pacific region." 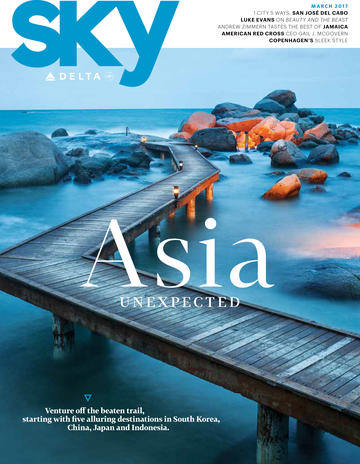 The issue gives readers an itinerary for visiting destinations including Mie Prefecture, Japan; Bintan Island, Indonesia; Jeju Island, South Korea; Lantau Island, Hong Kong; and Hangzhou, China. While the locales might be unknown to most, each is just a short trip from major cities in Asia that Delta flies to.

For example, Hangzhou, a picturesque town dotted with pagodas, tea plantations and classical Chinese garden, is a quick train ride from Shanghai. Thanks to Delta's partners China Eastern and China Southern, Delta offers nonstop service to Shanghai and Beijing from several U.S. cities.

The March issue of Sky also highlights Delta's new service between Atlanta and Seoul Incheon International Airport which launches this June and the arrival of the Airbus 350-900 aircraft which will join Delta's fleet on routes between U.S. and Asia-Pacific destinations.