Mary Barra: General Motors and the transformation to an all-electric future

Speaking with Delta CEO Ed Bastian on the third episode of Gaining Altitude, the GM Chair and CEO discussed how the automaker’s commitment to electric tapped into its people and attracted a new crop of employees.
DELTA NEWS ON THE GO. Subscribe and follow.

Being an industry innovator is critical to any company’s long-term health. That’s why leading the transformation to electric and refusing to be disrupted was so important to “unleashing of the people of General Motors” and attracting a new crop of employees who wanted to work for a company that aligns with their values, GM Chair and CEO Mary Barra said recently on Gaining Altitude.

Barra, speaking with Delta CEO Ed Bastian on the third episode of the series, described the challenge her team realized early in her tenure: Automotive technology would fundamentally change in the coming years. That’s when they invested in the autonomous vehicle company Cruise; not long after, GM started working on an electric platform for all of the company’s vehicles.

The team wasted no time diving in, Barra said – and the clarity of their goals empowered employees “to do great things.”

“When you give clarity … they know what they’re supposed to be doing, and they innovate far more than you could ever spec sitting from the chair as CEO or any other member of leadership. It was really unleashing the people of General Motors,” Barra said.

Barra added that GM’s commitment to going all-electric for their light-duty fleet by 2035 drove an increase in job seekers to the automaker. Now, over 40% of all salaried employees have been with the company for less than five years.

“Today’s graduates want to work for a company that aligns with their values and is doing something important,” she said.

What is Delta Doing?

Innovation requires companies like Delta and GM to lead – to be the disruptor, not the disrupted. Delta is reimagining flight so customers can travel knowing that carbon emissions related to their flights will be offset as part of the airline’s ambitious goal of achieving net-zero aviation.

On Sept. 25, Delta joined artists, performers, activists and business leaders at Global Citizen to celebrate our signing of the United Nations-led Race to Zero. The campaign unites businesses, cities, regions, investors, and financial and educational institutions to commit to net-zero carbon emissions by 2050 at the latest.

That announcement, and Delta’s most recent brand campaign, built on our commitment in March 2020 to be the first carbon-neutral airline globally. At that time, Delta committed $1 billion over the ensuing 10 years to drive innovation, advance clean air travel technologies, accelerate the reduction of carbon emissions and waste, and establish new projects to mitigate the balance of emissions.

“Our commitment to carbon neutrality is rooted in the idea that our customers shouldn’t have to choose between seeing the world and saving the world,” Amelia DeLuca, Managing Director – Sustainability, wrote in a recent LinkedIn post. “We know the value that travel brings to our lives, and we are dedicated to taking the urgent actions necessary to build a more sustainable future for flight.”

Some of our commitments include:

Gaining Altitude is a new series from Delta that tackles conversations worth navigating, connecting people while building understanding across the globe. CEO Ed Bastian hosts one-on-one live conversations with insightful leaders about topics that matter.

Catch the next episode with Jopwell CEO and co-founder Porter Braswell at 1 p.m. EDT Oct. 27. Discover all the episodes and watch live at delta.com/gainingaltitude.
Related Topics 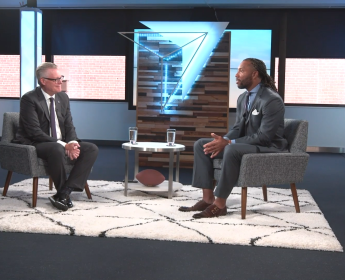