Delta’s operations at airports stretching from Melbourne Fla., north through Savannah, Ga., and Charleston, S.C., remain halted Friday evening as a result of Hurricane Matthew. The now category 3 storm prompted evacuation orders and states of emergency along the southeast coast. 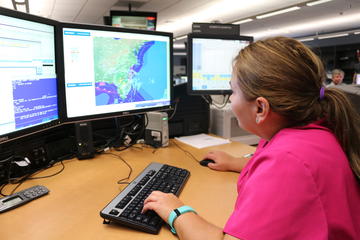 Flights are expected to resume in many cities Saturday morning after the storm passes with airports further north restarting Sunday morning.

Melbourne Airport, located just south of where Matthew made its near-landfall approach in the predawn hours Friday morning, is likely to restart operations Saturday morning, following an assessment of facilities, infrastructure and staffing. Orlando International Airport expects to accept its first arrival at 8 a.m. Saturday with the inbound of Delta flight 196 and a normal schedule for the remainder of the day.

Operations at Jacksonville International Airport, which was ordered closed Friday, are expected to resume Saturday morning as well.

Coastal airports in Georgia and South Carolina will remain closed until Sunday morning. Delta extended a severe weather waiver through Sunday to include a number of airports along the North Carolina coast to allow customers to adjust their travel plans around the storm’s impact.

Matthew will pass directly east of Jacksonville, Fla., at about 8 p.m. Friday as it heads northward, following the contour of the southeast U.S. Delta meteorologists expect it will approach Savannah, Ga., around 3 a.m. Saturday morning and then downgrade to a category 2 storm as it crosses the border into South Carolina. Based on current models the hurricane will become a category 1 storm late in the day Saturday.

Delta issued a severe weather travel waiver to allow customers flying to, from or through the storm’s path to make one-time changes to their reservations. The waiver was expanded to include airports as far north as Raleigh-Durham, N.C. Customers are encouraged to check for real-time flight status on delta.com or via the Fly Delta Mobile App.