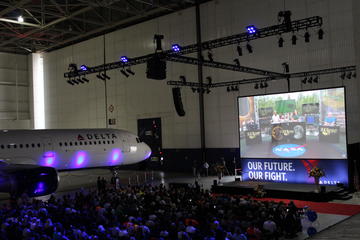 U.S. Sen. Amy Klobuchar, D.-Minn., and U.S. Rep. Tom Emmer, R.-Minn., headlined the rally alongside Delta's Chief Legal Officer Peter Carter. They discussed how Emirates Airline, Etihad Airways and Qatar Airways are propped up by illegal subsidies – more than $50 billion since 2004 – and how this cheating at trade agreements allows them to rapidly expand their fleets and global operations regardless of profitability, harming American carriers like Delta. Klobuchar and Emmer both made clear that this issue isn't political and spoke of the benefits the aviation industry brings to Minnesota – benefits and jobs that are at risk if these airlines drive American carriers off routes.

Following a screening of the short documentary film Delta produced about this issue earlier this summer, Carter engaged in a robust Q-and-A session with employees in the audience.