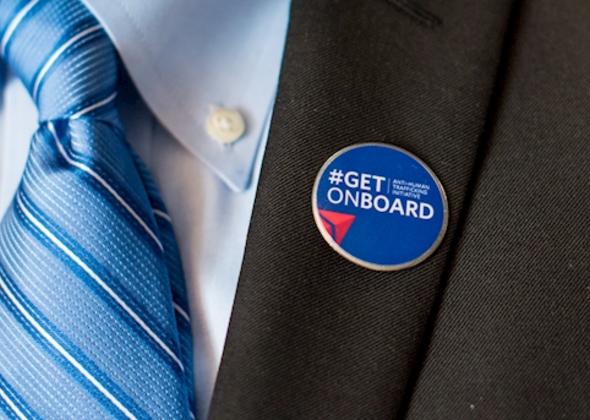 Human trafficking is one of the fastest growing crimes in the world, with an estimated 25 million victims. Following the airline's rally to fight human trafficking, Delta people continue taking the drumbeat of activism into airports and communities worldwide.

“As the Big Game heads to Atlanta this weekend, we’re seeing awareness spread among Delta employees in a measurable way,” said Allison Ausband, S.V.P. of In-Flight Service and head of Delta’s Anti-Trafficking Steering Committee. “We’ve seen 4,000 additional employees take our human trafficking prevention training in the past two weeks alone, and are keeping the momentum going until we are 80,000 strong.” 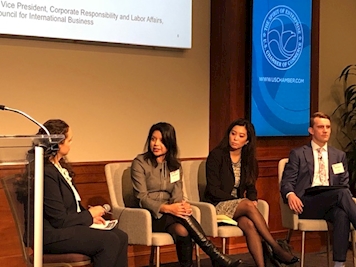 Braniff, second from left, highlighted Delta's most recent campaign, which calls for employees and customers to #GetOnBoard. The campaign includes enhanced signs in airports across the country, and an in-flight video that puts a face to modern slavery.

"Delta continues to lead the aviation and travel industry in building action and awareness about human trafficking," Mimi said. "We're proud of the engagement of our 61,000 employees who have received training to recognize trafficking indicators. And we're not stopping there."

In addition to the 61,000 Delta employees trained to identify and report human trafficking at home, onboard or wherever their travels take them, the airline's 535 employees volunteering at the big game in Atlanta on Sunday are equipped with training to detect exploitation.

This month, Delta joined King County, City of Seattle and Port of Seattle to launch a new human trafficking awareness campaign in the Pacific Northwest.

The Seattle campaign includes signs in airports, buses, trains, health clinics, community centers and elsewhere that encourage people to call the National Human Trafficking Hotline for help. The goals of the campaign are to raise awareness about the nature of human trafficking; how and where it occurs; how to prevent and stop trafficking; helping to identify victims and survivors; and promoting access to services. 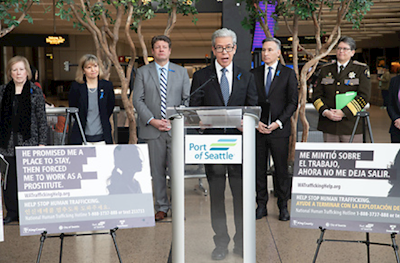 "As one of the world's largest airlines, we have a responsibility to fight for those who can't fight for themselves. In addition to partnering with organizations like Polaris, as well as King County, City of Seattle and Port of Seattle, we're fighting the issue of human trafficking head on. We're taking a stand to help raise awareness and send a clear message to traffickers to stay off of our planes, out of our airports and away from our communities."

The Seattle efforts are just another extension of Delta's #GetOnBoard campaign. Delta has led the fight against human trafficking since becoming the first airline to sign the ECPAT Code of Conduct in 2011. Delta facilitates volunteer opportunities for employees in 13 cities to support survivors in their recovery. Additionally, the airline offers apprenticeships for survivors at its Atlanta headquarters to provide opportunities to learn professional skills.