More than 200 aircraft deliveries - and counting

When the last of 91 Boeing 717s to join Delta’s fleet touched down in Atlanta Tuesday, Steve Marzec, a project manager in the airline’s Fleet Projects group reflected on what was a years-long effort by teams across the company to bring the aircraft to Delta. 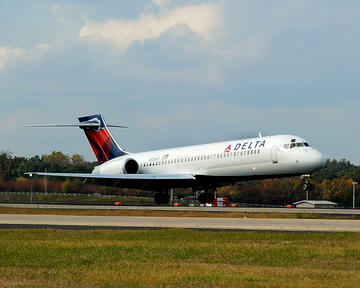 “This really has been an awesome accomplishment and a remarkable effort by Delta people in almost every area and discipline at the airline,” he said.

After undergoing roughly two months of work to complete a nose-to-tail transformation from the aircraft’s previous owner to the Delta product standard, the 110-seat jet didn’t get much rest. It departed on its first revenue flight to Savannah, Ga., just two hours after arriving.

Adding the new-to-Delta aircraft to the fleet involves a host of both technical and regulatory work. With the three Boeing 717s purchased from Scandinavian Airlines’ Blue1 subsidiary, for example, the process took 10 months from start to finish and included an engineering overhaul that touched every inch of the airframe, engines, flight deck and interior—including a fresh coat of paint and red Delta widget on the tail.

“We pore over every major system and function of the airplane, stripping it to the aluminum airframe and putting it back together,” Marzec said. “Ensuring it’s in solid working order and in the Delta standard that our employees and customers expect. It takes a dedicated and expert team to accomplish what we’ve done.”

Even before that work started Shawn Howard, a 25-year Delta veteran and a maven in the used aircraft acquisition space, diligently watched over and coordinated with both the internal and external organizations’ records review, aircraft inspections and various other tasks to make sure that Delta was getting the aircraft it paid for. He also worked with Blue1 to get the three Boeing 717s ferried from Finland to their new home in Atlanta. 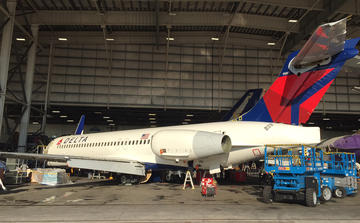 “We’re here to protect Delta’s interests and prepare our maintenance and engineering teams for what work may need to be completed prior to putting the aircraft in service,” Howard said.

Traveling thousands of miles to acquire aircraft is nothing new for Howard. He’s traveled to China, Japan, Switzerland and other destinations to bring jets into the fleet.

Flying the widget on this latest 717 also marks more than 200 aircraft deliveries to Delta since the merger with Northwest Airlines in 2008 including a mix of MD-90s, Boeing 737-900ERs, Boeing 717s, Boeing 757s, Airbus A321s and widebody Airbus A330s—most of those arriving in the last three years.

“Bringing roughly five aircraft a month to Delta in the last three years is no simple task,” said Amit Patel, Delta’s General Manager – Fleet Programs, who oversees part of the entry into service process. “But we have some of the best project managers, maintenance technicians, engineers and inspectors in the business who know how to take a complex fleet and make it work seamlessly.”