Hundreds of Shanghai-bound customers depart Atlanta today, the airline’s busiest flight day of the summer, onboard Delta Flight 185, the airline’s inaugural flight linking its largest hub with one of the most important commercial centers in China. 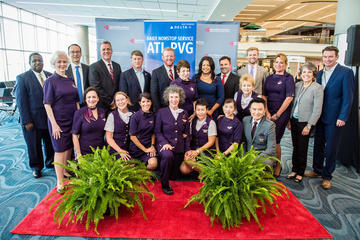 The daily nonstop flight provides convenient one-stop access to more than 150 destinations in the U.S. and Latin America from Shanghai – including 50 cities that previously did not have a one-stop flight option.

The new service to Shanghai complements Delta’s existing direct flights between Atlanta and Tokyo and Seoul, providing the city with nonstop service to the three largest Asia markets. Atlanta is now Delta’s fourth U.S. gateway to Shanghai, in addition to Detroit, Seattle and Los Angeles.

Thanks to Delta’s codeshare partnership with China Eastern, customers will be able to connect beyond Shanghai to more than 70 destinations in interior China.

The route will be operated using a Boeing 777-200LR aircraft featuring 37 lie-flat seats with direct aisle access in Delta One, 36 seats in Delta Comfort+ and 218 seats in the main cabin featuring a nine-abreast seating layout. Every seat has personal in-flight entertainment on demand. The aircraft is also equipped with satellite-based Wi-Fi and power ports at every seat.

Delta has invested significantly in its product to and from China, with Chinese-speaking flight attendants on all flights exit China; locally sourced Chinese meals created in partnership with new Chinese consulting chef Jereme Leung; and more than 50 Chinese movies or subtitles available through the airline’s inflight entertainment system.

The service will operate on the following schedule: