New paths across the pond: Delta, Virgin Atlantic to serve London-Gatwick from Boston and New York-JFK in 2020

London-Gatwick will be the eighth nonstop trans-Atlantic destination from Boston on Delta and its partners, who together offer up to 13 daily flights between Boston and Europe. In New York, the additional flight adds to Delta and Virgin's combined eight daily flights to London-Heathrow – and three additional daily flights to Edinburgh, Glasgow and Manchester – from Delta's JFK hub.

Delta and its joint venture partners together offer their customers the most transatlantic flights and seats out of the northeast United States.

"Delta once again shows that we are able to connect Boston and New York to the world through an unmatched global network paired with our award-winning service, industry-leading reliability, and an enhanced customer experience both in the air and on the ground," said Roberto Ioriatti, Delta's Vice President — Trans-Atlantic. "These new services will offer even more ways for our customers on both sides of the Atlantic to experience the products and services that set Delta and its partners apart while traveling to the destinations they value most."

"Virgin Atlantic is pleased to announce that we're expanding at London Gatwick, with the addition of new routes to New York-JFK and Boston operated in partnership with Delta," said Juha Jarvinen, Executive Vice President — Commercial for Virgin Atlantic. "Together we offer customers an unrivalled choice of U.S. destinations and the leading transatlantic service as well as one of our newest and most luxurious Clubhouses, located in Gatwick's north terminal. The new routes to New York and Boston will go on sale later this year and will complement the wide range of Caribbean and Florida flights already offered at London-Gatwick."

Full Gatwick schedule details will be announced later this year. The London-area airport was the destination for Delta’s very first transatlantic flight more than 40 years ago, when service began from Atlanta.

Upgraded aircraft on flights to London-Heathrow from Boston and JFK

Delta is also enhancing its aircraft on all flights between London-Heathrow and both Boston and JFK. Beginning this week, Delta flights between Boston and London-Heathrow will operate on an Airbus A330-200, which already serves Delta's JFK-Heathrow flights and features additional premium seats. And in November 2019, the airline will introduce on these routes fully refurbished Boeing 767-400s, featuring a modern interior and all four branded seat products – including a more private Delta One experience, Delta Premium Select, Delta Comfort+ and Main Cabin – to give customers greater choice when they travel. Delta's refreshed 764-400 aircraft will also feature the new wireless IFE system developed by Delta Flight Products with seat-back entertainment screens in every cabin and thoughtful touches like full-spectrum LED ambient lighting and memory foam cushions throughout the aircraft for added comfort.

Additional service to Paris, Tel Aviv and Amsterdam from JFK

In addition to the new Gatwick service, Delta's existing transatlantic offerings also continue to grow. The airline this summer will add a second daily flight from JFK to Tel Aviv and a second daily flight from JFK to Paris, along with a third daily frequency from JFK to Amsterdam that will begin in October 2019 and operate four times per week. The Tel Aviv and Paris flights will be served by Airbus A330-300 aircraft; the Amsterdam service will operate on a Boeing 767-300ER.

An unmatched global network in Boston

Delta is Boston's fastest-growing carrier by daily departures and this spring, the airline and its partners will offer the most international seats from Boston with new and expanded services to up to 19 international destinations, including:

Delta has doubled domestic daily departures out of Boston since 2013 and this year will serve four additional domestic destinations – Cleveland, Chicago, Washington-Reagan, and Newark-Liberty – while also adding more frequencies in another seven key domestic markets.

"Delta and its partners offer an unmatched global network that's capable of taking Boston customers to more worldwide destinations than ever before," said Joe Esposito, Delta's Senior Vice President – Network Planning. "We're offering up to 149 daily departures to more than 50 destinations from Logan in 2019, an increase of nearly 30 daily departures over 2018. Our investment in Boston at the airport and in the community only continues to deepen."

Delta CEO Ed Bastian visited Boston in March 2019 and announced the airline's plans to assume operations at all gates at Logan's Terminal A by the third quarter of 2019, growing Delta's airport footprint by five gates. Delta also plans by 2020 the expansion of its Delta Sky Club near gate A18, including new showers, expanded seating and a reimagined food and beverage area.

Delta is New York's largest carrier and operates more than 200 peak-day departures to more than 80 destinations worldwide from its JFK hub. The airline first unveiled its $1.2 billion, state-of-the-art international gateway at JFK's Terminal 4 in 2013.​ 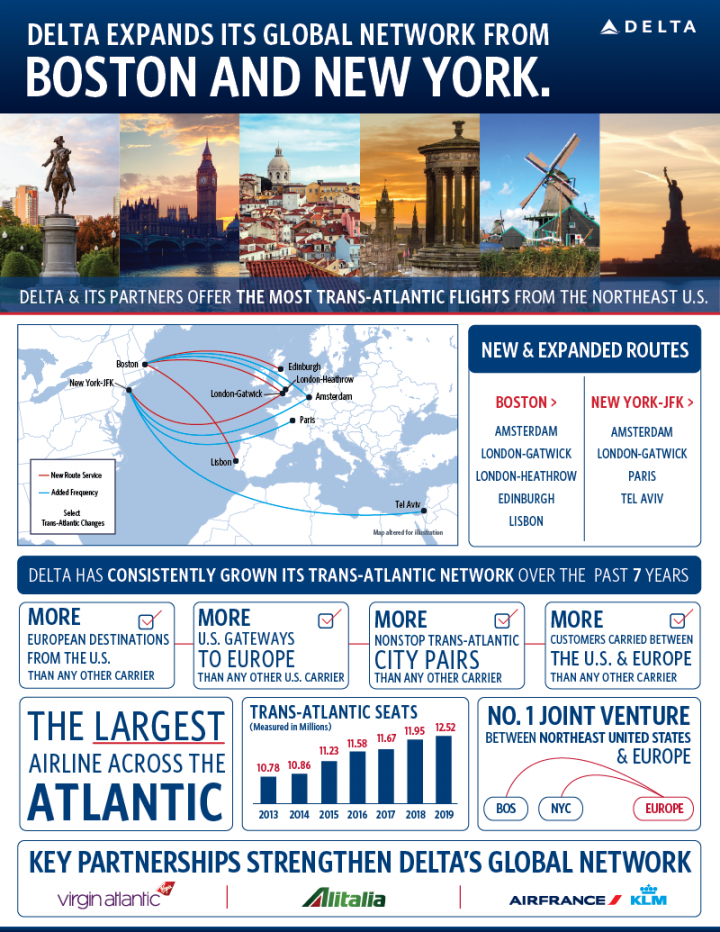