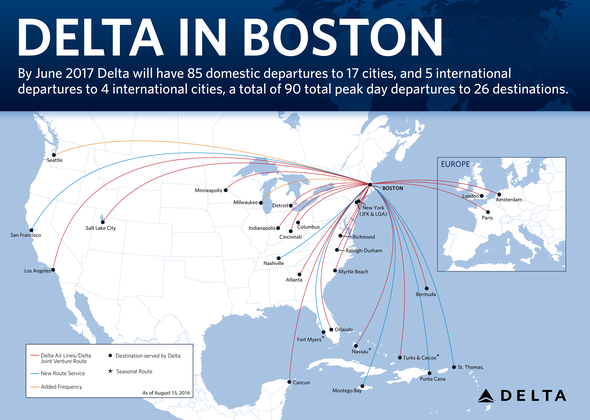 Delta is expanding in Boston with new service to San Francisco and Nashville, as well as more flights to Seattle and Milwaukee. By the end of 2016, Delta will be the only U.S. global carrier* to offer first class seating on every flight to and from Boston. 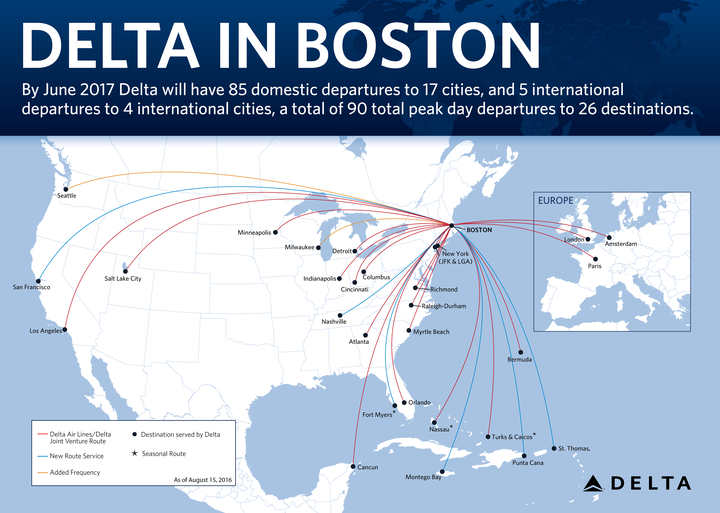 *U.S. Global Carriers include Delta, American, and United, and their respective regional and contract carriers.

Delta is the No. 1 carrier between Boston and New York connecting business travelers with the Delta Shuttle, operated by Delta and its connection partner Shuttle America, with hourly service 16 times daily between Logan Airport and New York City’s LaGuardia Airport as well as offering eight daily flights to JFK.  Delta Sky Club operates two locations in Terminal A providing customers with several healthy and fresh food choices and a number of complimentary drink options including local Samuel Adams craft beer and Starbucks coffee.  THE BAR at Delta Sky Club offers wines and premium spirits. SkyMiles members can use miles for premium drinks with a swipe their boarding pass.

Delta offers more capacity to Europe from Boston than any other U.S. carrier, with service to hubs in London-Heathrow, Paris-Charles de Gaulle, and Amsterdam. The airline is the only  U.S. Global Carrier to offer full flat-bed seats with direct aisle access in Delta One with Westin Heavenly In-Flight Bedding featuring a full-size pillow and quilted comforter, chef-designed cuisine and Master Sommelier Andrea Robinson's wine program and an upgraded TUMI amenity kit featuring Kiehl’s Since 1851 skincare products. Customers flying in Delta Comfort+ will benefit from up to four additional inches of legroom and 50 percent more recline than Main Cabin seats, as well as priority boarding and every customer will enjoy Delta Studio, which includes hundreds of complimentary movies, TV shows, songs and games and the ability to connect with Wi-Fi on every flight.

Earlier this year Delta committed to investing 1 percent of its pre-tax profits in the local communities where its employees live and work. As part of that initiative, Delta will commit financial support to local organizations such as Marine Toys for Tots and Boston’s Children’s Hospital.

Delta’s service history in Boston dates back to Aug. 11, 1933, when Boston-Maine Airways (later Northeast Airlines) began service from Boston to Bangor and Portland, Maine. Northeast Airlines merged with Delta in 1972.