A relatively fast moving but powerful Nor’easter storm dumped between seven and nine inches of snow on the New York metro area before moving toward New England where several more inches could fall through the evening Thursday. The heavy snowfall, at times at a rate of more than 2 inches per hour, and 35 mph winds significantly hampered operations at New York’s LaGuardia and JFK-International as Port Authority crews fought a losing battle to keep runways and taxiways clear. JFK’s runways were closed at 9:30 a.m. ET Thursday and are expected to remain closed due to snow accumulation and repairs to runway lights until early afternoon.

“Delta employees have been weathering the storm while staying focused on delivering great customer service and managing what has been a difficult operational day throughout the Northeast,” said Sandy Gordon - Vice President, Airport Customer Service, who oversees Delta's east region. “We anticipate getting our customers and aircraft moving as soon as we’re on the backside of the storm and it’s safe to do so.”

The airline expected to resume operations into LGA and JFK around 3 p.m. Thursday afternoon, pending snow removal and facilities assessment.

Delta Wednesday canceled several hundred flights ahead of the anticipated operational disruption from the storm. A Northeast winter weather waiver was issued days ahead of the storm to allow customers the opportunity to make one-time changes to their travel plans without incurring a fee.

This storm uniquely developed over land to the west of the D.C. and New York metro, unlike most Nor’easters which tend to gain strength along the North Carolina coast and track northward along the Eastern Seaboard. Snow started falling in the New York area around 4 a.m. Thursday morning. By noon it had tapered off to light snow. Moderate snow is expected in Boston and up through the east coast of Maine until 8 p.m. tonight. 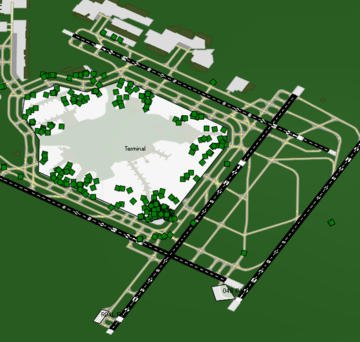