Delta’s operations at Boston Logan International Airport resumed late Tuesday and are continuing strong Wednesday as Delta teams work to rebound quickly after another winter storm dropped more than 14 inches of snow at the airport. 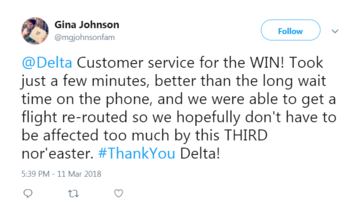 The airline doesn’t expect any further disruptions as a result of this latest Nor’easter, though customers are always encouraged to check the status of their flight on Delta.com or the Fly Delta Mobile App.

“Only Delta people have the dedication and expertise to weather a significant snowstorm like we saw in the Northeast and bounce back the very next day,” said Henry Kuykendall, Delta’s Senior Vice President for Northeast Airport Operations. “The hard work of our teams on the ground in Boston and other airports in the Northeast, as well as their colleagues in the air and at the airline’s Operations and Customer Center in Atlanta, made all the difference for our customers.”

Customers took to social media to praise Delta employees for providing travel flexibility and getting them through the storm safely.

With improving weather conditions in the Northeast, Delta expects normal operations at its New York-JFK and LaGuardia hubs for the remainder of Tuesday. Delta’s operations at Boston’s Logan International Airport are expected to resume Wednesday.

Approximately 10 Delta Connection flights at Boston’s airport have been cancelled for Wednesday. Delta does not expect to make any further cancellations, though a small number of additional flight disruptions are possible at other Northeast stations due to field conditions and runway closures.

Customers are encouraged to check Delta.com or the Fly Delta Mobile App for the most up to date flight status. A winter weather waiver was issued over the weekend, ahead of the storm, allowing customers to make one-time changes to their itinerary.

Delta’s operations at Boston’s Logan International Airport are suspended Tuesday as a Nor’easter expected to bring 20 inches of snow throughout the day continues to impact airports from New York through Maine. A handful of arrivals late Tuesday evening are planned in Boston, as the airline eyes a planned restart of operations at the New England airport, pending an assessment of the airport’s runways as well as city roadways and mass transit.

Ahead of the oncoming weather, Delta repositioned aircraft away from the storm and parked a small number of aircraft in airport hangars to ensure a quick restart once the storm passes. Snow is expected to taper off by 3 a.m. early Wednesday morning in Boston.

Elsewhere, Delta reduced flights to and from its two New York hub airports, though operations there continue as Delta crews work diligently to deice aircraft at both LaGuardia and JFK International. Snow is expected to end in New York by 2 p.m. Tuesday afternoon with improving conditions through the rest of the day.

All told, Delta has canceled approximately 400 mainline and Delta Connection regional flights as a result of this latest storm. Delta expects to rebound its operations Wednesday with a near-normal flight schedule planned in the Northeast.

As always, customers are encouraged to check Delta.com or the Fly Delta Mobile App for the most up to date flight status. A winter weather waiver was issued over the weekend, ahead of the storm, allowing customers to make one-time changes to their itinerary. 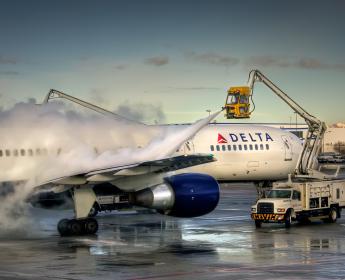 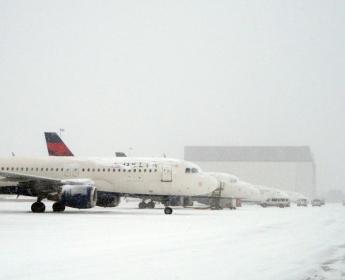 Article  |  Waivers
UPDATE: Delta issues travel waiver ahead of winter weather in Southeastern US
Jan 14, 2022 10:45am 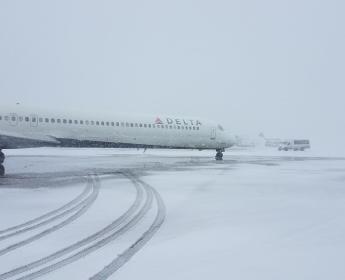 Article  |  Waivers
Delta issues travel waiver ahead of winter weather in Northeastern US
Jan 14, 2022 11:30am