Delta's Supplier Diversity team is proud to honor the contributions of the company's top minority-owned, women-owned and small business suppliers. From Sept.15 to Oct.15, the team joins Delta and the entire nation in observing National Hispanic Heritage Month, which celebrates the histories, cultures and contributions of American citizens whose ancestors came from Spain, Mexico, the Caribbean and Central and South America. 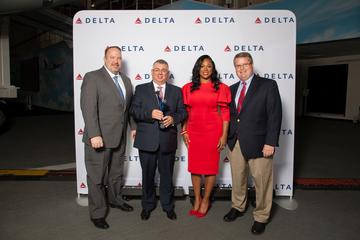 Delta enjoys a partnership with approximately 60 vendors whose owners​ are of Hispanic heritage, including 2017 Star Award winner Aerothrust Holdings, LLC, Meristem Packaging and Aviation Inflatables. These and other outstanding Hispanic suppliers help Delta deliver an unforgettable travel experience to every passenger, and are an essential part of what makes Delta a world-class airline.

"We are very grateful for the many diverse suppliers that work so hard to assist us in delivering excellence in every area of our business," said Karmetria Burton, General Manager – Supplier Diversity. "Our strategy is based on our collaboration, partnership and shared values. Working together, we are able to achieve mutual success."

Delta is increasing both the number and the dollar volume of its relationships with suppliers of Hispanic heritage. Diverse spend within this segment, currently approaching $40 million, is growing rapidly and expected to increase substantially as Delta rolls out a number of strategic supplier development initiatives.

Here's a look at supplier diversity by the numbers:

40 – The number of years that Delta has been involved in supplier diversity. Delta was one of the founding members of the Georgia Minority Supplier Development Council in 1975, and remains a primary sponsor of the state's top minority business advocacy organization.

$1,000,000,000 – Delta's long-term diverse spend goal. Delta is engaging on a plan to join the Billion Dollar Roundtable, an elite group of companies that spend at least $1 billion per year with certified domestic minority-, woman-, veteran-, LGBT-, and disabled-owned businesses.

​National Hispanic Heritage Month began with President Lyndon Johnson proclaiming the first Hispanic Heritage Week in 1968. The proclamation required the celebration to include September 15 and 16, in recognition of the Independence Day celebrations of the nations of Central America and Mexico, respectively. President Reagan expanded the commemoration to a 30-day period in 1988.

Today, America's Hispanic population of almost 60 million is both the nation's largest minority population, at nearly 18 percent, and the fastest growing. Within the next 30 years, more than 100 million Americans will have roots in South and Central America, the Caribbean, Mexico and Spain.

​The Supply Chain Management department, through its Supplier Diversity team, is actively incorporating this year's focus – Driving Inclusion – into every aspect of its day-to-day operations and relationships with suppliers. Delta's partnerships are built on the company's core values of honesty, integrity and respect.