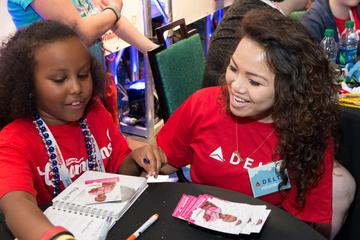 Champions are inspiring pediatric patients from across the U.S., who have personally benefited from donations to their hospitals and exemplify how vital community support is for local children’s hospitals.

Orlando-based employees welcomed the Champions in celebrity fashion, complete with a red carpet, Hollywood Stars lining the corridor and employees who stood ready for their signatures. 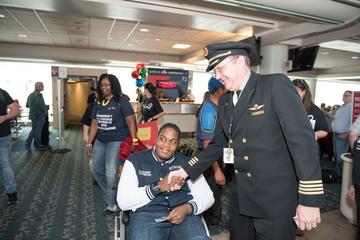 “Michael saw one of the Champions coming off of the plane in tears because he was in so much pain,” he said. “Without hesitation, Michael walked up to the Champion and asked if he would like to go visit the cockpit, and within seconds he was able to put a smile on the boy’s face. These Champions have faced many challenges and obstacles, and stories like these that make you proud to work at Delta and impact the lives of others.”

Delta employees also participated in the pin exchange, a special event in which Champions collect pins from corporate sponsors, hospitals and fellow Champions and sign each other’s  commemorative Champions book.

The conference concluded with the Champions Medals Ceremony, hosted by the Miss America organization, Radio Disney star Alli Simpson and America’s Got Talent host Nick Cannon. Each Champion was honored for their courage and presented with a medal. Notable moments from the ceremony included an on-stage headstand, selfies with Nick Cannon and one inspiring moment when a Champion stood up from his wheelchair to receive his medal. 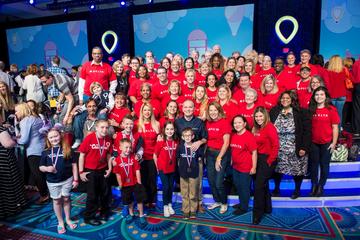 Children’s Miracle Network Hospitals raises funds and awareness for 170 member hospitals that provide 32 million treatments each year to kids across the U.S. and Canada. Donations stay local to fund critical treatments and healthcare services, pediatric medical equipment and charitable care. Since 1983, Children’s Miracle Network Hospitals has raised more than $5 billion, most of it $1 at a time through the charity's Miracle Balloon icon.

Delta is a longtime supporter of the Champions program and a partner of Children’s Miracle Network Hospitals since 1998, contributing more than $5 million. In addition to cash sponsorship, the airline supports the charity by offering charter flights for the Champions and their families, hosting golf tournaments and allowing customers to donate SkyMiles to Children’s Miracle Network Hospitals through SkyWish.