'Our livelihoods at stake:' Employees make case against Gulf carriers on Capitol Hill

It’s about jobs. Hers and her husband’s. 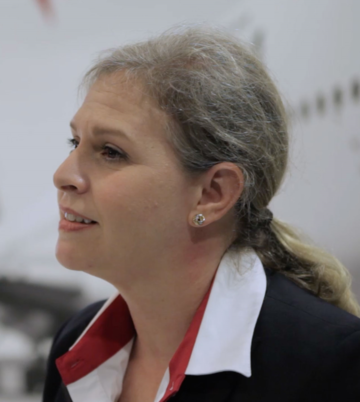 This month, the Atlanta-based flight attendant joined dozens of fellow Delta frontline employees to take that personal message to Washington, D.C. Employees met with Congressional members and staffers to urge the U.S. government to stop Emirates, Etihad and Qatar airlines from undercutting fair competition with cheap flights made possible by huge subsidies from their government owners, United Arab Emirates and Qatar.

“I’m a 26-year flight attendant. My husband is a 27-year flight attendant. We have two young children. All of our eggs are in Delta’s basket. Our livelihoods are at stake,” Maria told an aide to U.S. Rep. Drew Ferguson, R-Ga. “It’s critical to us that these Gulf carriers play by the same rules as everybody else. We feel like we can compete against anybody, but it’s unfair to compete against airlines that don’t need to make a profit because of huge subsidies.”

Delta’s D.C.-based Government Affairs team flew in dozens of frontline employees from across Delta’s network, dividing them into groups of four and five to meet with congressional offices. In all, the Delta staffers conducted about 70 meetings.

During a prep session before the meetings began Tuesday, employees read backgrounders like college students cramming for exams. Though well-versed on the issues, all wanted to be able to speak with authority once they got to Capitol Hill.

Bob Letteney, Managing Director — Government Affairs, reminded the employee group that Emirates, Etihad and Qatar have been given $50 billion in subsidies by Qatar and UAE, forcing Delta and other airlines to cut routes that are no longer financially sustainable. And he gave the groups some encouragement just before they headed to U.S. House and Senate offices.

"The members see us [the Government Affairs team] all the time. Congress really wants to hear from you, the frontline employees who are their constituents,” Letteney said. “It has a big impact."

“How do you feel?” Palmer asked. 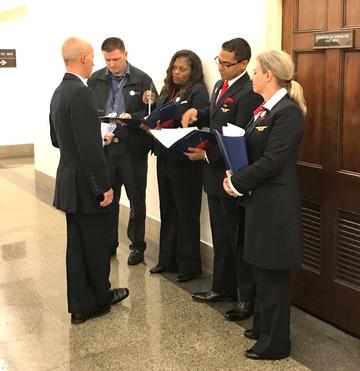 Armed with the day’s meeting schedule and Biscoff cookies – which employees joked would soften even the most skeptical lawmaker - the teams visited U.S. House and Senate members’ offices from Georgia, North Carolina, Michigan and Minnesota – states with a substantial Delta employee base.

Once in the offices, employees took turns making points about the Gulf carriers’ threat to U.S. jobs, unfair practices and violation of Open Skies treaties that allow for easy air travel between nations. Employees from Flight Ops pilots to TechOps mechanics spoke fluently on the policy nuances and impact of the Gulf carriers’ actions.

“They provide a product at below-market prices and we can’t compete with that,” said New York-based pilot Chris Logan.

“For every route we have to cancel, like the Atlanta-to-Dubai route last year, nearly 1,500 U.S. jobs are lost,” said Eric Santos, an Atlanta-based flight attendant.

“I’m concerned for my future. I have the potential to lose my job and so do my colleagues,” said Santos, a 12-year Delta veteran. “It’s not fair that these Gulf airlines are funded by their governments. It’s not a level playing field.”

“This is affecting our jobs. We have more than 1,100 employees in North Carolina,” Stacy Ours, a Raleigh-Durham based customer service agent, said during a visit to the office of a home-state congressman. “We just want our voices to be heard.”

After a full afternoon of meetings Tuesday, the employee-lobbyists were back on the Hill early Wednesday morning for a breakfast meeting with U.S. Sen. David Perdue, R-Ga. Perdue delighted the Delta crowd by standing on a chair to take a selfie with employees of his home state airline.

Employees asked members to sign a letter asking Congress and the White House to take action to enforce Open Skies agreements. Several Members did so or pledged to look into the issue.

The effort to defend Open Skies and U.S. aviation jobs has been going on for a few years – the first “fly-in” on the Gulf carriers issue took place in 2015 – and it wasn’t going to be resolved in a couple of days. More employees will participate in another fly-in this May. These Delta employees said they would continue pushing until their voices are heard.

“It’s not just my career at stake, it’s the careers of everybody at Delta Air Lines and really the aviation industry in the United States,” said Cincinnati-based pilot Jerry Timmerman. “The stakes are too high for us to stop.” 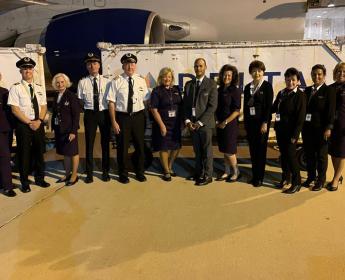