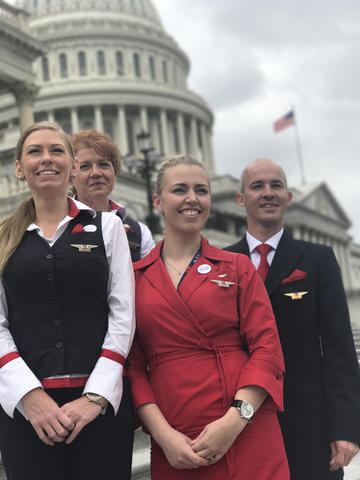 Today, the Trump administration announced an important agreement with the State of Qatar that will protect American workers and result in a series of changes in the way Qatar finances and operates its state-owned enterprise, Qatar Airways, including an end to government subsidies.

As part of the agreement, Qatar has committed to operate in a transparent manner by using internationally agreed upon accounting and auditing standards and applying commercial terms to all transactions. Additionally, Qatar has committed to not introduce any “fifth freedom” passenger flights to the United States, which are flights coming from outside Doha carrying passengers to the U.S.

Delta CEO Ed Bastian said: “Today's agreement by the State of Qatar is a strong first step in a process for commercial transparency and accountability, and we remain committed to working with the administration to address the harmful trade violations by the United Arab Emirates as well. We are grateful to the Trump administration for working to restore a level playing field for the U.S. aviation industry and to the tens of thousands of Delta people who have made their voices heard in an effort to protect millions of American jobs and put an end to unfair competition.”

American Airlines Chairman and CEO Doug Parker said: “Today’s landmark action will help create a level and fair playing field for American Airlines and other U.S. carriers. We are extremely appreciative of the president and his administration for their dogged determination to enforce U.S. trade agreements and stand up for American jobs. The administration’s actions today thoughtfully address the illegal subsidies received by Qatar Airways, and most importantly, support American workers and closer to home, American Airlines’ 120,000 team members.”

United Airlines CEO Oscar Munoz said: “It is important that all parties understand the need for a level playing field for U.S. based carriers, and the impact unfair competition can have on the good paying jobs our industry supports. We applaud this agreement and thank the administration for effectively representing the interests of the American aviation industry.” 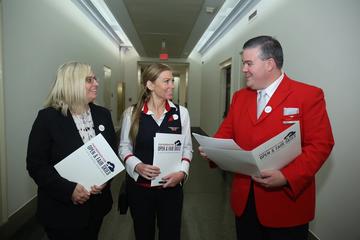 Air Line Pilots Association, International President Captain Tim Canoll said: “The Air Line Pilots Association, Int’l is gratified and encouraged that the Trump administration has taken initial steps to end unfair trade practices and protect American jobs. We will watch closely to determine whether Qatar acts to end its current subsidy-focused practices and embrace a transparent business model. Now, the administration must stand firm on enforcing the U.S. Open Skies agreement with the United Arab Emirates and end its government subsidies that allow its airlines, Emirates and Etihad Airways, to compete unfairly against U.S. airlines and threaten U.S. jobs.”

Allied Pilots Association President Captain Dan Carey said: “Billions of dollars' worth of subsidies later, it’s nice to know that at least one of the ME3 airlines is maneuvering toward a level playing field."

Association of Flight Attendants-CWA International President Sara Nelson said: "This is an important step and we appreciate Secretary Tillerson’s commitment to taking this issue seriously. Enforcement of our Open Skies Agreements is critical to protecting hundreds of thousands of U.S. aviation jobs. We thank the over 300 bipartisan lawmakers for encouraging the administration to protect good U.S. jobs. We will continue to work with all stakeholders so the people who make aviation fly have a fair chance to compete."

Association of Professional Flight Attendants National President Bob Ross said: “This is the first crack in the unity of the three Gulf carriers and confirms that they are not in lockstep when it comes to undermining U.S. jobs. We look forward to the State Department closely monitoring the implementation of this agreement and we will continue to contest Emirates and Etihad Airways’ unfair and anti-competitive practices. We hope the U.S. government will stand behind American workers and not let these two air carriers off the hook.”

Southwest Airlines Pilots’ Association President Captain Jon Weaks said: “SWAPA appreciates the administration’s work to start a new chapter in the efforts to ensure foreign competitors don’t undermine our international trade agreements. This is a long overdue step in the enforcement of our Open Skies agreements.”

The agreement was announced today at a State Department event featuring Secretary of State Rex Tillerson and Secretary of Defense James Mattis as part of the U.S.-Qatar Strategic Dialogue. The Partnership for Open & Fair Skies has documented more than $25 billion in subsidies that the government of Qatar has provided to its state-owned airline, violating the Open Skies agreement between Qatar and the United States. The United States has more than 120 Open Skies agreements with nations around the world, all designed to promote open and fair air travel free of government interference. The Partnership for Open & Fair Skies has been working with the U.S. government for close to three years to address the more than $50 billion in rule breaking subsidies the Gulf carriers receive from the UAE and Qatar.

The Partnership for Open & Fair Skies is a coalition that includes American Airlines, Delta Air Lines and United Airlines, along with the Air Line Pilots Association, the Allied Pilots Association, the Southwest Airlines Pilots’ Association, the Association of Professional Flight Attendants, the Association of Flight Attendants-CWA, the Communications Workers of America, and the Airline Division of the International Brotherhood of Teamsters. The Partnership is calling for the United States to enforce its Open Skies agreements with the UAE and Qatar, which have pumped more than $50 billion in subsidies to their state-owned airlines, Emirates, Etihad Airways and Qatar Airways. In January 2015, the Partnership published a white paper providing a comprehensive overview and analysis of this issue.