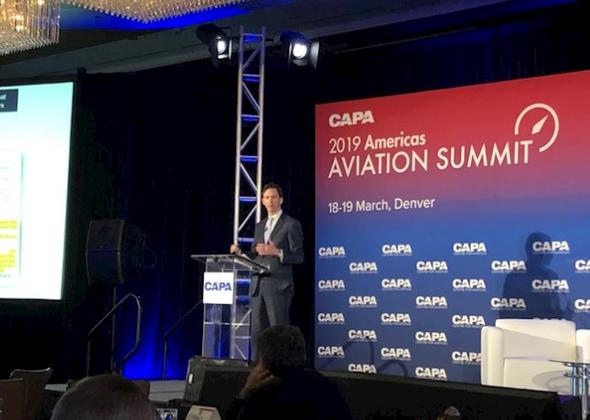 Peter Carter, Delta's Executive Vice President and Chief Legal Officer, highlighted the consumer benefits of international joint ventures and made a case against state-subsidized airlines in appearances at the 2019 CAPA Centre for Aviation Americas Conference.

"We sometimes forget how much the international travel experience has been transformed" by airline partnerships such as Delta's with Virgin Atlantic, Korean Air, Aeromexico, Air France-KLM and others, he said during a keynote presentation at the conference in Denver Monday.

"Today on Delta anyone can book a ticket to almost anywhere on the globe in a completely seamless manner," Carter said. "The kicker is that this has all been accomplished while fares have gone down."

Carter noted that in past decades, international travel could be an arduous journey that often included overnight connections, lost baggage and an inconsistent customer experience.

"Joint ventures have driven tremendous improvements in the experience," he said, by allowing airlines to cooperate on schedules, operations and sales, creating a more seamless and convenient journey.

And, he added, Delta can fly international routes today on its own aircraft that never could have been feasible  without international partnerships, citing the airline's new Minneapolis-Seoul and Tampa-Amsterdam routes, among many others.

Carter also participated in a panel on Open Skies policy. He laid out the case that Qatar Airways is violating the nation of Qatar's agreement with the U.S.​ by shifting subsidies to Air Italy, a small Italian airline that Qatar partly owns.

Qatar Airways, which is owned by the government and is heavily subsidized, has been using Air Italy to operate Europe-to-U.S. flights, which Carter called "cheating."

"We are big advocates and proponents of Open Skies, but we do think it needs to be fair," he said. "And what Qatar is doing is not fair."