Delta took to the red carpet in London yesterday in honor of the annual Prince’s Trust national Celebrate Success Awards.

The star-studded event, attended by charity founder HRH The Prince of Wales plus a number of celebrity ambassadors, honors young people who have turned their lives around with support from the Trust by completing a training or work placement program. The Prince’s Trust is the airline’s Community Affairs partner in the U.K and part of Delta’s Force for Global Good.

A group of Delta colleagues from London attended the event with Nat Pieper, Senior Vice President – EMEA, taking the stage to present the Rising Star award.

“The achievements of all of the young people nominated are testament to hard work and determination. It’s humbling to hear their stories and on behalf of our 80,000 employees across the globe, we’re honored to be associated with Celebrate Success and the Rising Star Award,” Pieper told the audience. “The nominees should all be very proud of their achievements.”

Delta’s U.K. Country Manager, Nadia Clinton, was part of the judging panel that named Faisal Ahmed from Edinburgh Rising Star 2016 for overcoming personal tragedy to go on and forge a career in healthcare, drawing on his own experiences to help others. 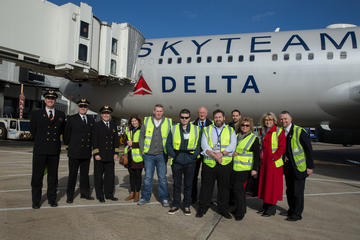 The Celebrate Success Awards came days after London’s TechOps and ACS teams took the London and South East U.K. regional finalists on a tour of Delta’s operations at Heathrow. The group tried out a Delta One seat on board one of the airline’s Boeing 767-400 aircraft and visited the TechOps facility before watching the action on the runways from the top of the airport’s control tower.

Alex Smillie, who won the local Rising Star category, works for DHL based at Heathrow and had a wonderful day with the Delta team. “I’m a big fan of airplanes and really enjoyed going up the control tower. I have learned a lot and give the day 100 out of 10.”

The charity, which is celebrating its 40th anniversary this year, helps young people across the country who are facing issues such as homelessness or mental health problems, or have been in trouble with the law. It offers free programs to help people turn their lives around through initiatives that include improving their job prospects and offering financial support.