Delta has invested billions of dollars in products, services and technology to enhance the customer experience in the air, from installing full flat-bed seats in Delta One to offering free in-flight entertainment. And the airline is also a leader in its commitment to improving the experience on the ground.

Delta has participated in more than $7 billion in airport projects since 2006 and, along with its airport partners, will be involved in over $12 billion worth of facilities infrastructure projects in coming years.

Here is an update on five key airport projects under way:

Delta, which operates more than 275 peak-day departures from its LGA hub, began construction of a $4 billion replacement of Terminals C and D at New York’s LaGuardia Airport in 2017. This project builds on the airline’s extensive investment in New York airports over the past decade and will allow Delta to improve the airport experience for both connecting customers and those starting or ending their journeys in New York. The first new gates will open later this year as work continues on the new centralized headhouse (check-in and baggage claim) and roads.

When complete, the new terminal will feature: 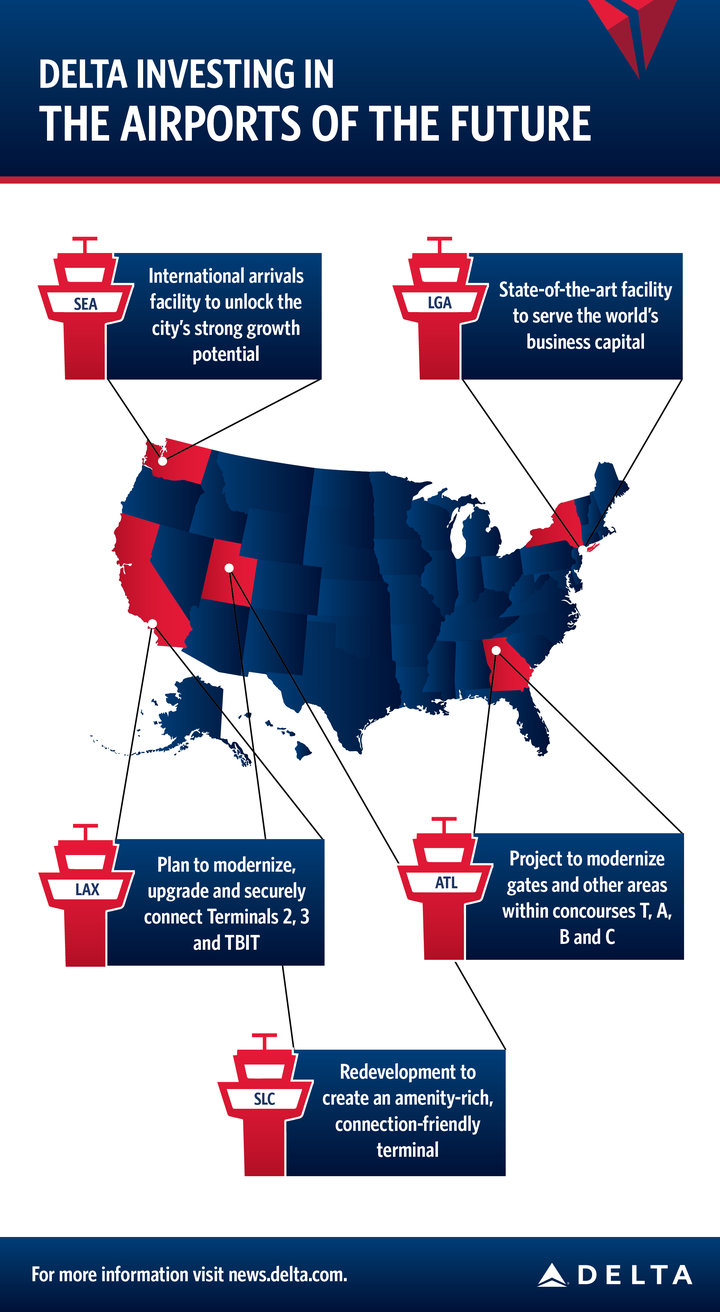 At LAX, Delta is investing $1.86 billion to modernize, upgrade and connect Terminals 2, 3 and the Tom Bradley International Terminal (Terminal B). When completed, the facility will offer more security screening capacity with automated security lanes, more gate-area seating, in addition to all the amenities that Delta’s customers have come to expect at LAX, including Delta ONE at LAX check-in space, and a new Delta Sky Club.

Several key components of the project will be complete by the end of 2021, including the centralized lobby between Terminals 2 and 3; the centralized security screening area; consolidated baggage claim area; the new 25,000 sq. ft. Delta Sky Club with a Sky Deck overlooking Terminals 2 and 3; and the Terminal 3 concourse. The remaining components, including the secure connector between Terminals 3 and B and the renovated Terminal 3 satellite, will be complete by the end of 2023.

Seattle’s favorable geography, strong economy, diverse corporate base and focus on international trade make the city an ideal location for a world-class global hub, but growth in air service was stagnant in part due to constrained international facilities. To remedy this issue, Delta has been closely engaged with the Port of Seattle on the construction of a new $968 million International Arrivals Facility (IAF), which, once completed in late 2020 will provide much needed capacity to enable a more efficient hub operation. The IAF will support 20 international-capable gates and will be able to process up to 2,600 passengers (up from 1,200 today) with additional immigration capacity and nearly triple the international baggage claim infrastructure.

Delta is the largest global carrier at Sea-Tac with 175 peak-day departures to nearly 60 destinations, including seven long-haul international destinations.

Delta is the largest airline serving Salt Lake City, with more than 280 peak-day departures to over 100 cities. The airline is partnering with the airport to completely replace the existing facilities with a state-of-the-art terminal complex and linear concourses, similar to the Atlanta airport design, that will drive operational efficiencies for this high-connect traffic hub. Construction on the nearly $4 billion program began in 2014 and will continue in phases through 2026. The terminal building and first sections of the north and south concourses are scheduled to be completed in the second half of 2020.

Delta is a key partner in the Atlanta Airport’s multi-billion dollar master plan that provides for investments in operational and customer experience improvements at the world’s busiest hub airport, driven by Delta’s 1,000 daily departures. In late 2018, Delta completed a $140 million project to modernize 85 gate holdrooms, adjacent corridors, and center points on concourses T, A, B and C. We also continue to coordinate closely with the airport on the domestic terminal modernization program to add canopies over the departures roadways, resurface the exterior of the building, and construct pedestrian bridges from the parking decks to the terminal to improve traffic flow. Additional near-term components of the capital plan include a new de-icing complex, a south end-around taxiway, an expansion of the domestic security check-point, and an interior domestic lobby refresh.