Punished for playing with girl, team gets upgrade

NEW YORK - Two weeks ago, the Charlottesville Cavaliers, an under-11 little league basketball team from Virginia, was disqualified from a championship game after officials learned they had a girl on the roster.

That decision didn't sit well with the WNBA team the New York Liberty or Delta, who worked together to make things right. 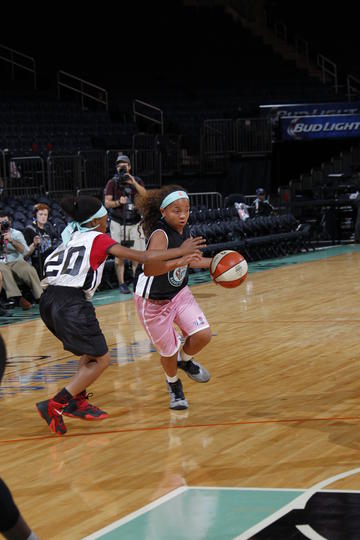 Ten-year-old Kymora Johnson had played with the Cavaliers for years, but it wasn’t until this year, after receiving complaints from parents, that officials at the National Travel Basketball Association tournament decided to ban girls from playing on boys' teams.

The team was not told that it was disqualified from the tournament until it had reached the semifinals. The Cavaliers stood at the semifinal game wearing pink uniforms in support of their teammate.

The story quickly became national news, which led the Liberty to talk with Delta about getting the team, their coaches and parents up to New York this past weekend. Delta is the official airline of the Liberty.

Thanks to Delta, the Cavs were guests at the Liberty’s game against the Tulsa Shock on Saturday and then played a game of their own against a team from Madison Square Garden’s “Basketball in the Boroughs and Beyond” program, a youth basketball initiative.

“The Liberty organization thought it would be great to do something special for the team,” Kristin Bernert, Senior Vice President of  Business & Basketball Operations for the New York Liberty, told The Huffington Post. “Ultimately, the Liberty are striving to inspire young women to take their basketball experiences and build a foundation for successful, healthy adult lives.”