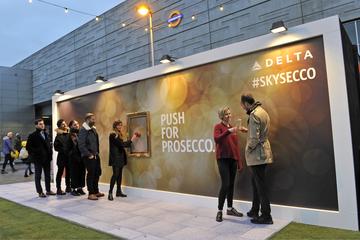 The “Push for Prosecco” pop-up has been residing exclusively in the U.K. capital for two days, offering a taste of Delta to customers and the public. People simply press the call bell – reminiscent of on-board service - and a glass of fizz appears before them guaranteed to invoke the holiday spirit.

“We have been working hard to elevate the in-flight experience throughout the aircraft and serving Prosecco in the Main Cabin is another differentiator for us,” said Shane Spyak, Delta’s Vice President – Sales for the Europe, Middle East, Africa and India region. “Britain is reportedly the world’s largest consumer of Prosecco so it’s a natural fit for us to launch our new international offering in the heart of London.”

Delta first offered Avissi Prosecco on domestic flights for Main Cabin and Delta Comfort+ customers this summer before rolling it out internationally in the fall. The move is part of the airline’s ongoing enhancement of its in-flight services; this autumn, Delta became the first U.S. global carrier to offer free mobile messaging at 30,000 feet, enabling passengers to stay connected and exchange real-time messages in flight.