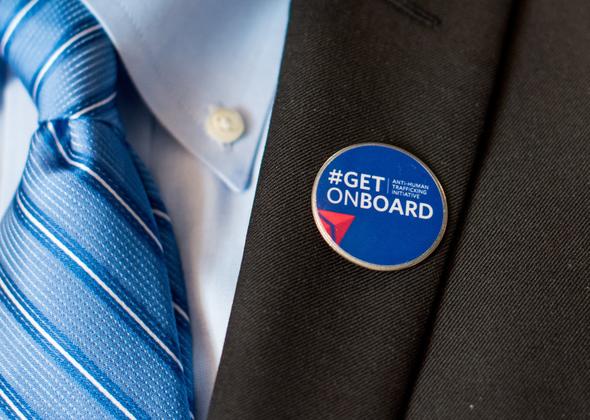 The case for corporations to combat human trafficking builds, as anti-trafficking experts at Polaris released a report of novel data showing traffickers’ use of business systems for exploitation.

A call for airlines to take action is pronounced in its Transportation section, showing that 71% of trafficking survivors traveled on planes to the United States during the recruitment process, and almost 40% of victims flew at least once during their periods of exploitation.

While the jolting numbers challenge many to consider their response to modern slavery for the first time, Delta is not new to the conversation. The analysis also recommends changes businesses can make to their systems to limit trafficking. As a leader in the fight since 2011, the report calls out Delta’s strategy as a model.

The airline’s fight has been driven by passion from the CEO throughout every division at Delta. In response to the report, Ed shared his thoughts on LinkedIn last week:

“At Delta, we pride ourselves on the good we do creating opportunities and connecting people and cultures. The fact that our airplanes are sometimes used for this abhorrent crime – which deprives an estimated 25 million people of their freedom every year – is saddening and disturbing.”

As Delta refuses to look the other way, longstanding relationships with industry leaders like Polaris have been key to the airline’s approach. Most recently, the partners developed a new training exclusive for Delta people.

Last fall, the airline gave a $1M donation to the organization’s National Human Trafficking Hotline – a resource for survivors and communities to use to report suspected cases of trafficking. The Hotline, which has been in operation for 10 years, has seen a 19% increase in calls since Delta’s sponsorship in September.

Additionally, over 48,000 cases reported to the Hotline were aggregated as a resource for creating the recent report.

The airline’s partnership with Polaris also allows customers to get involved by donating miles to bring survivors home or to safety. Delta is matching the first million miles, and 57 flights have been donated thus far.

Ed concluded his post with a charge to leaders in financial services, social media, hospitality, housing, healthcare and transportation to #GetOnBoard. “To other business leaders – I encourage you to study the report. Find your line in the sand and draw it. By learning how your own industries are manipulated for injustice, your systems can become tools in defending the dignity of others.”