Delta operated on Saturday a relief flight with 20,000 pounds of relief supplies and water, as well as humanitarian aid workers to San Juan. The airline also stood up temporary processing counters, thanks to IT equipment transported by the flight, to help restart operations after Hurricane Maria left Terminal B at the San Juan Airport inoperable. 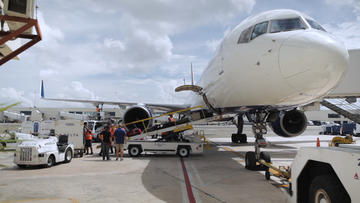 “The damage we’ve seen in Puerto Rico has been devastating and nothing like we’ve ever seen before,” said Michael Luciano, Delta’s station manager in San Juan. “We’re very limited in what we have, but we’re moving forward because we need to recover Puerto Rico.”

Delta brought generators, water and other relief supplies, as well more than 70 American Red Cross workers to provide medical assistance on the island. Humanitarian workers – many of whom are nurses, firefighters, former police and military officers – will assist in damage assessment, mass care, communications, re-uniting families and counseling. The return flight back to Atlanta on Saturday brought a full plane of ticketed and relief customers. There were also three more flights on Sunday and Monday, each of which were upgraded to larger aircraft to accommodate more people.

The flight followed a $250,000 donation Delta made to the American Red Cross to aid in relief efforts in Puerto Rico and the U.S. Virgin Islands on Friday.

In addition to relief supplies and workers, Delta brought over equipment to restart its operation. The terminal the airline operates out of saw significant flooding and broken glass, but Delta re-located within the airport and set-up temporary processing counters to check-in and board customers.

“We’re doing all we can to get our operations up and running despite the damage caused by the storm to our terminal,” said Gareth Joyce, Delta's Senior Vice President – Airport Customer Service & President – Cargo. “We greatly appreciate the support of other carriers who are sharing their gate space so that we can collectively get the customers who are trying to leave San Juan off the island and to safety.”

As a result of the storm damage, Delta employees have had limited access to the airline’s in-airport supplies. Additional relief flights are planned to bring more supplies, including food and amenity kits, for customers and employees.

Despite numerous constraints, Luciano said these limitations won’t stop his team from recovering.

“My team has come together as leaders and said, ‘Let’s help Puerto Rico and let’s help our customers,’” Luciano said.

Delta customers can support relief efforts for hurricane victims by donating through Delta's Customer Microsite, created in partnership with the Red Cross. Donations will go toward immediate relief needs.