Return of ATL-BRU service celebrated with tributes to Belgian community 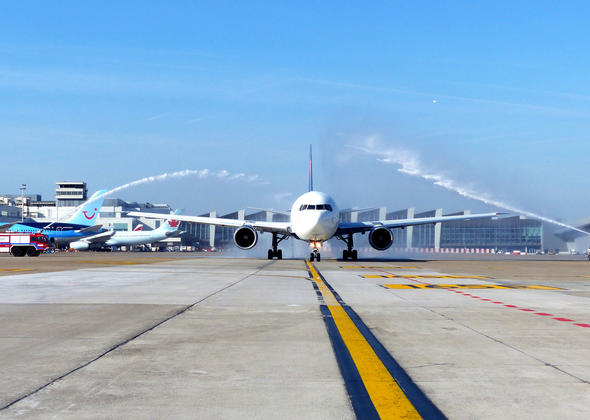 Delta celebrated the return of its Atlanta-Brussels flight with events on both sides of the pond. The move returns the Belgian capital to its full complement of Delta flights one year after the terrorist attack at Brussels Airport.

The festivities began Thursday with Chief Financial Officer Paul Jacobson speaking at a reception in Atlanta hosted by the Belgian Consulate. Also attending were Mayor Kasim Reed and Pieter De Crem, Secretary of State for Foreign Trade of Belgium.

“We’ve served Belgium for over 25 years and have transported more than 5 million customers on our flights,” Jacobson said. “The Delta culture is one of taking care of our customers, each other and the communities we are privileged to serve. And it will be in that spirit that we resume our nonstop to Brussels from our home base here in Atlanta.”

On Monday Nat Pieper, Senior Vice President – Europe, Middle East, Africa, welcomed the flight’s arrival along with the local Delta team and executives from Brussels Airport and the Belgium Association of Corporate Travel Management. On the return flight the aircraft was sent on its way with a water cannon salute. “The Delta team here in Belgium has worked so hard to keep our operations running over the past year during the toughest of times,” Pieper said.

Delta’s daily service continued between Brussels and New York-JFK while the airline suspended the ATL-BRU flight shortly after the terrorist attack. The renewed Atlanta service will operate year-round with a daily service over the summer season.